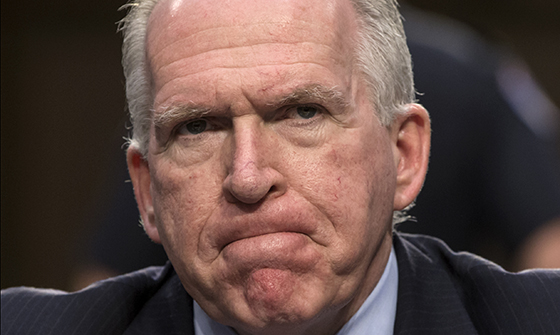 About six months after I left WFAA Radio in Dallas I had occasion to be back in the building. Frances, the switchboard operator and receptionist, greeted me with a warm smile. Frances and I knew each other well after my six years working there and we liked each other.

But even though I knew exactly where to go inside the building to keep my appointment, Frances made me wait in the lobby. I no longer had free access. Nor was I privy to the revenue reports that I at one time received weekly. That’s what happens when you leave an organization’s employ.

That is unless you are high on the food chain among the swamp creatures of Washington, D.C. A case in point involves former CIA director under President Obama John Brennan. Among the things we have learned since Donald Trump was elected is that it has been the custom that guys like John Brennan keep their security clearances after they leave their posts.

The reason given for keeping former top intelligence officers “in the loop” is that it aids in ‘institutional memory.” As the thinking goes, it allows current officials to call up and say, “Hey John, what about such & such?” Such is the officialjustification.

In reality it’s an exercise in swamp creatures taking care of swamp creatures. One of the real perks — in fact by far the most important perk — of a high-level appointive office in the federal government is the opportunity to cash in on it once you leave the post.

Cable TV news channels have a voracious appetite for the “expertise” of former high-ranking government officials. There is also a lot of money to be made on the rubber-chicken speaking circuit.

Thus, we have been treated for two years to John Brennan accusing Donald Trump of treasonous behavior while simultaneously continuing as an apologist for the manifest failures of the administration John Brennan served.

The fact is, there is no real justification for continuing to allow retired intelligence officers to retain their clearances. The practice was started for self-serving and cynical reasons.

WFAA didn’t need me out on the street with insider information telling the world what it was doing wrong. The country will be better served if John Brennan is treated the same way any company would treat any departing employee.

John Brennan’s temper tantrum at having been relieved of his security clearance by a president who is justifiably tired of Brennan’s crap is a prime example of the very kind of swamp-dweller behavior that Donald Trump was elected to fix.