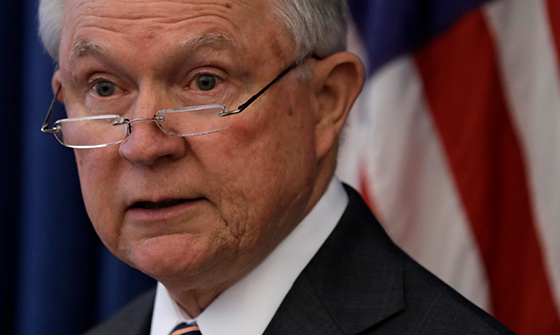 If somebody spots Attorney General Jeff Sessions in the halls of the Department of Justice Building on Pennsylvania Avenue, please find a D.C. police officer to write him a ticket for loitering. Because, if he’s actually there, he’s just hanging around toward no discernible purpose.

You’ll recall that five minutes after the 2016 election, the Clinton campaign, stunned at having just lost to Donald Trump and desperately clutching for any explanation other than the obvious one, began blaming Ms. Clinton’s shocking defeat on “Russian collusion.” The media took that meme and ran with it.

You’ll further recall that Mr. Sessions famously recused himself from any Justice Department investigation into alleged collusion between the Trump campaign and Russia. That recusal in March 2017, six weeks into the Trump presidency, opened the door for the Robert Mueller special counsel investigation that began that May.

In the 14 months since, even though Mueller has obtained indictments and convictions on matters utterly unrelated to the Trump campaign, not a shred of evidence has been brought forth to support the allegation that there was any “collusion” between the Trump campaign and the Russians. Zero. Zilch.

Yet Sessions permits the open-ended Mueller investigation to go on even as he ignores tangible and increasingly irrefutable evidence of actual law breaking all around him. The list of offenses is lengthy and the list of potential defendants reads like a Washington D.C. Who’s Who.

At the very top of the list is Herself, Mrs. Hillary Rodham Clinton. It is now beyond any reasonable debate that Hillary Clinton grossly mishandled classified documents while she was secretary of state. That’s a felony.

Any honest observer who looks at the publicly available evidence can only conclude that Mrs. Clinton, while she was secretary of state, engaged in quid pro quo official state department actions in return for large speaking fees for her husband and large contributions to the Clinton Foundation.

It’s now abundantly clear that high-ranking FBI and Department of Justice officials, including Bruce Ohr, at the time the highest-ranking career employee of the DOJ, misled the FISA court by misrepresenting Democratic Party opposition “research” on Donald Trump – the now debunked “Steele Dossier” – as the justification for a warrant to surveil the Trump campaign. Bruce Ohr’s wife, Nellie, was working at the time for Fusion GPS, the author of the Steele Dossier. Under DOJ regulations, Ohr was required to recuse himself from any investigation in which his wife was involved. He did not. Nor did he report his wife’s income from such activities on his DOJ financial disclosures. All of this is illegal.

The list goes on but time doesn’t permit. And yet, Jeff Sessions not only refuses to take aggressive action on his own, he continues to stonewall the congressional committees looking in to the sordid mess. Is it any wonder that President Trump is so outspoken in his frustration with Sessions?

Every president makes mistakes. In the case of Donald Trump, appointing Jeff Sessions has been by far his biggest.