Another bad week for the truth. 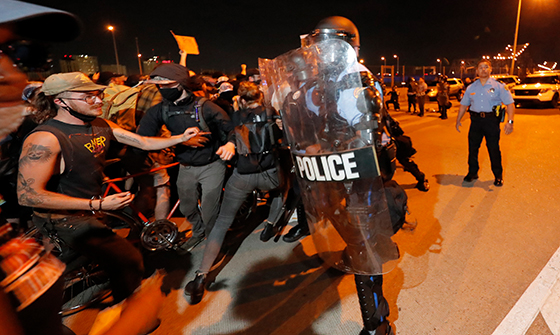 Protesters breach a line of police in New Orleans, Wednesday, June 3, 2020, during a protest over the death of George Floyd. (AP Photo/Gerald Herbert)

Senator Cory Booker of New Jersey, a black man and a Democrat, said this recently.

We have so many people in our country, African American men, mostly unarmed, being murdered by police officers and no way of holding them accountable.”

I’m certain that millions of Americans – perhaps a majority – believe that statement. Consume enough coverage from the “mainstream media,” watch enough late-night TV, follow the social media posts of enough celebrities, follow the social media posts of your own acquaintances or, for certain, listen to the professor in just about any college classroom in America, and you almost can’t help believing it.

There is widespread belief in every corner of the country – by old and young, male and female, Democrat and Republican – that black men are being viciously, wantonly and frequently gunned down by racist police officers.

That belief has spawned protests in cities from coast to coast. Those protests have, in city after city, morphed into looting, rioting, mayhem and lawlessness.

But is Senator Booker correct? Is his statement actually true? Are “so many…African American men, mostly unarmed, being murdered by police officers…?”

As it turns out, no. Not even close. And the source of that answer is the database on police shootings that the Washington Post began maintaining in 2015.

Last year, according to the Post, exactly ten unarmed African Americans were fatally shot by police. Ten. In a country of 325 million.

In five of those cases, a police officer was physically attacked before the shooting occurred. One case involved the accidental discharge of the officer’s weapon during a physical struggle. The remaining four cases involved a pursuit or a standoff. In two of those four cases, one of which happened in October of last year in Ft. Worth, the officers were criminally charged.

The Post goes on to say that the number of police shootings is dropping. In 2015, during the presidency of Barack Obama, 38 unarmed black men were killed by police. So, too, were 32 unarmed white men. Last year was the safest year for unarmed suspects – of any race – since the Post began tracking the data.

Not so for the police. According to the FBI’s crime statistics database, 48 police officers were killed in 2019 – nearly five times the number of unarmed black suspects killed.

The death of George Floyd at the hands of those idiot cops in Minneapolis is an outrage. We’ve all seen the video. It’s appalling. It should never have happened. No person of goodwill of any race believes otherwise.

But most of the media, most of the entertainment industry and almost all of the professoriate would have you believe that George Floyd’s death is part of an epidemic of murder committed against innocent, unarmed African American men by racist police officers.

The failure of our political leaders and the media to call out that lie, and by so failing to allow passions to build and cities to then burn, is a crime unto itself.