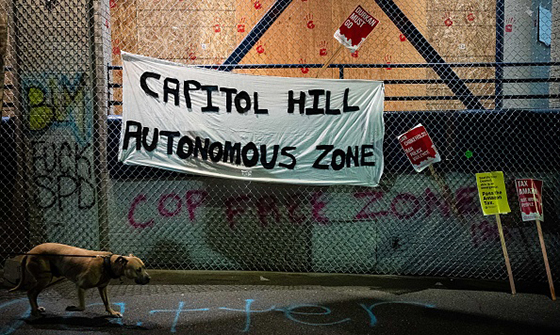 SEATTLE, WA – JUNE 09: A “Capitol Hill Autonomous Zone” sign hangs on the exterior of the Seattle Police Departments East Precinct on June 9, 2020 in Seattle, Washington. Protests have continued in many parts of the city including inside City Hall and around the Seattle Police Departments East Precinct, an area that has earned the moniker “Capitol Hill Autonomous Zone,” during ongoing Black Lives Matter protests in the wake of George Floyds death. (Photo by David Ryder/Getty Images)

The Capitol Hill neighborhood of Seattle is well known. By day, its numerous coffeehouses are credited with making Seattle the center of the universe in the coffee world and the cradle of Starbucks. By night Capitol Hill is an entertainment mecca.

It’s also the center of Seattle’s counterculture. That makes it prime real estate for the types of demonstrations and civil unrest that erupted in the wake of the Minneapolis police killing of George Floyd.

That pot has now boiled over.

After a week of intense fighting between the Seattle Police – with the help of the National Guard – and a violent coalition of Black Lives Matter and Antifa activists, the city’s leadership has consigned the Capitol Hill neighborhood to anarchy.

As the confrontation intensified, Seattle mayor Jenny Durkan ordered police to abandon the department’s East Precinct station in order to “deescalate the situation.” Activists immediately poured in. Several Seattle police officers are in the hospital.

With the police gone, the activists secured effective control of the six square-block area. They quickly rearranged police barriers to establish a secure perimeter, set up a rudimentary government, establish a paramilitary security force and declare the area to be the “Capitol Hill Autonomous Zone.” A sign on one of the perimeter barriers reads, “You are now leaving the USA.”

The city government is completely acquiescent. Kshama Sawant, a member of the city council, called the takeover a “victory” against “the militarized police force of the political establishment and the capitalist state.”

Washington state governor Jay Inslee, when asked about the situation said, “I have heard nothing about that.”

Businesses and property owners inside the neighborhood perimeter are being extorted for cash in order to avoid having their properties destroyed. The police will not answer calls within the zone.

The activists have a long list of demands that includes the outright abolishment of the Seattle Police Department and retrials for all racial minorities serving prison time. They pledge to maintain control of the zone until their demands are met, setting the stage for a protracted siege.

Nothing from prior riots and civil unrest prepares the mind for this. In the 1960s, local governments at least fought back. Here in 2020, the elected polity of one of the prettiest cities in the country stands complicit in the breakdown of the social order. In an area encompassing dozens of businesses and thousands of residents, a parallel government has been established and the duly elected government is making no effort to stop it. The tax dollars that businesses and residents pay for police protection mean nothing.

Seattle, like a lot of major American cities, has been run by Democrats for 50 years. But for most of that time, even Democrats asserted basic dominion over the social order. But not anymore. Seattle’s über-left political class has now capitulated to the forces of chaos and anarchy.

If you’re not worried that a newly emboldened Antifa, et.al. won’t try to replicate their success in other Democrat-run cities, you’re not paying attention.