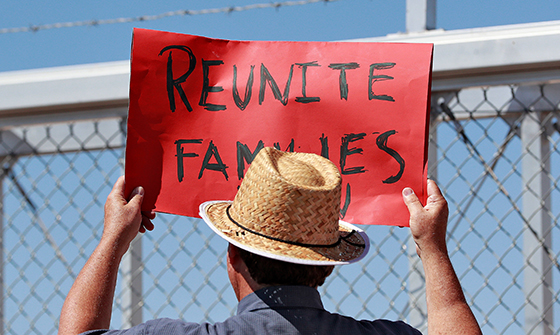 We have suffered a week of hysteria and emotional outbursts by people who should know better concerning illegal immigrants and their children. The hysteria has been driven in large measure by media reporting that is lazy and sloppy at best or blatantly biased and agenda-driven at worst. In the aggregate, the coverage of this story has been atrocious and I’m compelled to say that some of that atrocious coverage ran on the radio station that I own.

In case you have been on a week-long sabbatical in Antarctica, here is what you missed.

From seemingly out of nowhere there appeared stories in the media about Immigrations & Customs Enforcement (ICE) officials separating children from their parents when the parents were apprehended at the southern border trying to enter the United States illegally.

The overwhelming majority of the coverage either said or broadly implied that the separations arose from a new Trump administration policy. The network newscasts and the cable TV shows aired footage of children crying in anguish as their parents were being led away. (Some outlets showed images of detained children taken in 2014 under the Obama administration and led viewers to believe that they were recently taken.)

Former first ladies, the pope, a group of Methodist ministers, every single Democrat, more than a few Republicans, everyone on CNN and MSNBC, the usual suspects in Hollywood and all of the late-night talk show hosts all weighed in – often hysterically – in opposition to the “new Trump policy.”

But here’s the thing. The policy isn’t new and it’s not Trump’s. Policy regarding the handling of the children of detained illegal immigrants springs from a 1997 ruling by the Ninth Circuit Court of Appeals in the case of Reno v. Flores.

The court ruled that the federal government must do one of two things with respect to the children of people who are arrested for attempting to cross the U.S. border illegally. First, the government must place those children with a close relative or family friend “without unnecessary delay.” Second, if the first is not possible, the government must keep children whose parents are in custody in the “least constrictive conditions” possible. The government has a time limit of 20 days to do one or the other.

In most cases, those arrested for entering illegally are quickly tried, convicted, sentenced to time served and within hours sent home. The impact on children is de minimis. The cases of those charged with felonies, however, and those who seek asylum, take much longer. And it is the 2,000 or so of the children of these people that have driven all of the current wailing and hair-pulling.

Under the Obama administration, a child was a de facto free pass into the United States. Illegal immigrants with either the presence of mind or the good fortune to have a child in tow enjoyed the benefits of a “catch & release” policy. They were given a notice for a court date at which they were supposed to appear and answer for the crime of illegally entering the country. In the vast majority of cases, to the surprise of no thinking individual, those notices to appear were roundly ignored.

The people of any nation that proposes to call itself sovereign get to decide how many immigrants that nation admits, from where it admits those immigrants and the degree to which those prospective immigrants must prove, as a condition of their admission, that they will contribute to the nation’s well-being.

For years We the People have been denied that prerogative by virtue of the fact that our government chose, without our consent, to ignore our immigration laws. All of what you have seen this past week derives from the fact that this administration has reversed that policy.

But that’s not how the story is being covered. Not even close.