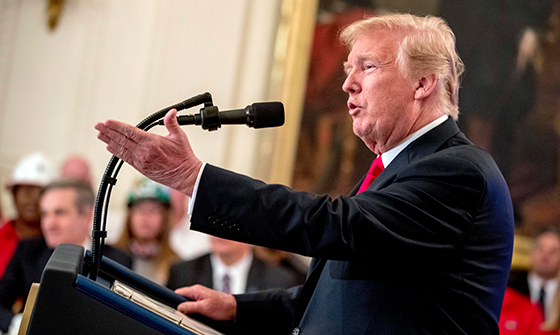 Largely lost in the distracting din of President Trump’s early morning tweets, his baiting of opponents, the howling, unhinged, foaming-at-the-mouth opposition from Democrats to everything that he says and does, breathless announcements in the media of “bombshell” revelations about Trump wrongdoing, endless investigations and sordid attempts to dig up something – anything – upon which to hang an impeachment, off-the-wall-crazy environmental policy proposals from a former barmaid-turned-congresswoman-turned media darling, and – lest we forget – the interminable Mueller investigation…is the fact that American workers are doing better than they have in half a century.

We’ve had strong jobs numbers before. But not this strong. The lead sentence in a series of articles last weekend in the Wall Street Journal read, “The job market doesn’t get much better than this.” People on every rung on the employment ladder who previously had trouble landing a job are now finding work. Wages are on the rise – bringing optimism about the future along with them. In some places, the unemployment rate is below three percent. Nearly everywhere there are more job openings than there are job seekers to fill them.

Yet think really hard and try to come up with even one politician about whom you have ever said, “Wow, that guy really created a lot of jobs.” Nobody coming to mind (save for perhaps the Gipper)? Me neither.

That is until now. Unless you’re economically illiterate, ideologically hidebound or just blinded by hatred of Donald Trump, it is impossible to dismiss the policy successes of the Trump administration and their impact on employment. Tax reduction and regulatory reform have undeniably kick-started the jobs market. You just can’t plausibly pretend that the policy success isn’t there.

The response by Democrats to that success has been laughable. They’re out talking about 70 percent top marginal tax rates (on the “rich” of course), increased corporate tax rates, free healthcare and free college. But only when they’re not busy setting their own hair on fire over climate change or plotting a Trump impeachment that will never happen.

One of the Dems’ latest fevered-brain ideas is a guaranteed basic income regardless of how little or how much one works. It’s idiotic, of course – made more so by the fact that it’s not even what most people want.

A job is about more than earning money to pay to pay the bills. A job is about accomplishment. It’s about purpose – receiving something of value for having done something of value. Most people want to be worthwhile and a good job makes that possible. And for the first time in a long time there are jobs out there – good jobs – that are begging for people to fill them.

Throughout 2016 candidate Donald Trump said, “I’ll be the greatest jobs president that God ever created.”