Trump, Sanders and the ruling class. 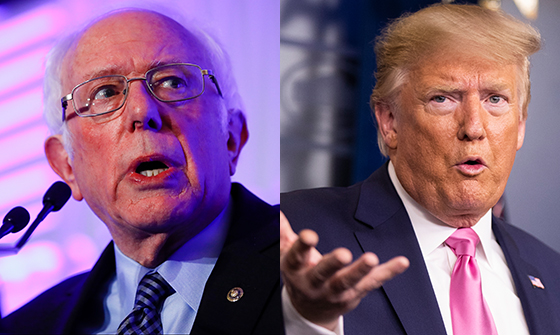 The term “ruling class” is of fairly recent coinage. It is a pejorative used to describe a cohort of people at the top of government and key institutions in the United States. The ruling class has members from both parties. It includes the likes of the Bushes and the Clintons. Nancy Pelosi is a member, as is Mitch McConnell. It includes Ivy League college presidents and Fortune 500 CEOs.

The ruling class is attended by a covey of well-tailored, well-coiffed and well-manicured courtiers from the elite media. The relationship between the ruling class and the media is a symbiotic one. Each depends on the other in order to thrive.

Members of the ruling class inherited an unimaginably wealthy superpower nation that was capable of accomplishing anything to which it directed its resources and energies. The parents of today’s ruling class defeated the tyranny of Hitler in Europe and the tyranny of the Japanese Imperial Government in the Pacific. Having saved the world, they came home and built the Interstate Highway System, put men on the moon and left to their children well-functioning industries, hospitals, universities, public schools and local governments.

Members of today’s elite media inherited platinum-plated brand names like CBS, NBC, ABC and the New York Times – all of which enjoyed high levels of trust by the American people.

In a single generation, the ruling class and the elite media have each managed to squander their inheritances.

The ruling class turned government into a lucrative industry. They greatly expanded the federal government and then created the mechanisms by which that government could be manipulated for private gain.

While few were noticing, they created an economic model under which profits are privatized while the risks attendant to generating those profits are socialized. From this insidious bargain we got the housing crisis and the resulting deep recession of 2008.

The ruling class collaborated to outsource massive portions of the U.S. economy to China – where slave-wage labor fattens profits on manufactured goods at the expense of the American middle class. As a result, we find ourselves on the cusp of a pandemic only to learn that most surgical masks, hospital gloves and antibiotics are now made in China.

Concurrent with the export of manufacturing the ruling class was busy importing cheap household help and service industry labor from Mexico.

For its part, the elite media abandoned even the pretense of objectivity in order to shield the ruling class from unfavorable scrutiny. That tacit arrangement ensured that all involved did very well financially. Some of the best-paid people in the country work in Washington D.C. or within the 20 square block chunk of Midtown Manhattan that is home to most of the national media.

All of this helps explain the rise in 2016 of two political figures who have next to nothing in common save for an innate understanding that millions of citizens have finally realized that they’ve been getting screwed.

One of those figures is Donald Trump. The other is Bernie Sanders.