Hey Dems, is this really the best you got? 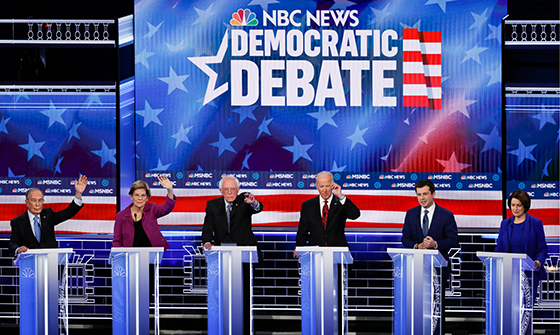 So this is it? One of these six candidates is going to beat an incumbent president who is presiding over one of the most robust American economies in recent memory? It’s hard to imagine how any self-reflective Democrat can think so.

Let’s start with Elizabeth Warren. Marmish and scolding, Liz evokes memories of that teacher in junior high school we all hated.

And she’s a serial liar.

In order to jump the line for consideration for teaching posts at the University of Pennsylvania and later Harvard, she fabricated a Native American ethnic identity out of whole cloth. She told the same lie on the paperwork for her Bar registration in the state of Texas.

She was eventually forced to apologize at a Native American forum in Iowa last summer for the “harm” that she caused.

There’s Pete Buttigieg. Tightly scripted, lightly accomplished. Most of the folks in South Bend, Indiana were glad to see his mayoralty end. Tops among those saying ‘good riddance’ to Mayor Pete are South Bend African-Americans. Of the six candidates still in the Democratic race, Buttigieg polls the lowest among black voters.

Young debt-laden college graduates with squishy, socially-conscious degrees that they can’t monetize in the labor market are all in for Bernie. But as for the rest of the country – particularly the industrial midwest? Well, the Democratic elders know better.

Biden? My goodness, by now you almost have to feel sorry for ol’ Joe. He just looks sad.

What about Amy Klobuchar? Well, what about her? Does anything she’s said stick in your mind? She came out of New Hampshire better than expected. But did any New Hampshire momentum translate into mojo on the debate stage Wednesday night in Las Vegas? If it did, I missed it.

And that brings us to Mike Bloomberg. One commenter to to this site characterizes Bloomy as a Republican pretending to be a Democrat. If so, it’s not going to work. Bloomberg got hammered Wednesday night in Vegas. Trailing behind him are public utterances and deeds that won’t play well with ‘MeToo’-animated women and black voters. He’s a billionaire running in a party that has spent the last 20 years bashing billionaires.

His on-the-record defense of New York’s ‘stop & frisk’ law enforcement policy, and his oh-so conveniently-timed subsequent renunciation of that policy, will haunt him every single day.

So yes, apparently this is it. This is what the Dems have. And they’re in deep trouble.