Trump being Trump: bug or feature? 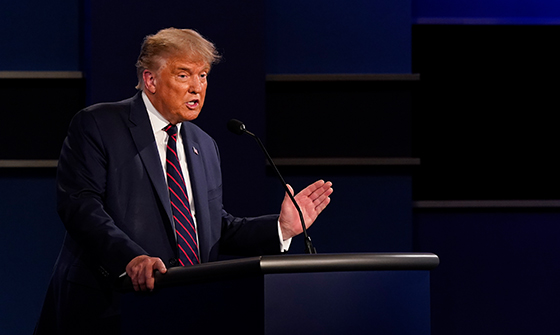 Let me start by stipulating that I wish President Trump had interrupted less during Tuesday night’s debate.  At many points in the debate, I thought that the president was unnecessarily aggressive.

From a purely partisan perspective, I thought there were several moments Tuesday night at which if Trump had kept his mouth shut, there was a good chance that Joe Biden would have fumbled on his own one-yard line.

The same goes for interrupting moderator Chris Wallace. There was at least one time I remember that Wallace seemed on the cusp of actually asking Biden a (semi) tough question (an occurrence about as frequent as the appearance of Halley’s Comet).

So again, and for the zillionth time, we find ourselves talking about Donald Trump and again the discussion centers on style. Many people, including nominal Republicans, don’t like Trump’s style. In fact, when you find a real Trump hater and he or she tells you of that hatred, when you boil it down, it’s almost totally about style and mannerism and demeanor. (Oh, and that he’s a racist.)

Test this for yourself. Ask one of your Trump-hating acquaintances to tell you what policies of Trump’s they don’t like. Drinks and dinner are on me if you get a direct answer (except for the part about him being a racist).

He’s so rude. He’s a braggart. He’s a name-caller. He tweets too much. That’s the answer you’ll get.

Fine. I will – again – stipulate to some of those points.

But I am constantly forced to ask myself, is this a bug or a feature?

Nobody objected to Mitt Romney’s style. Oh sure, they said he was a Ritchie Rich, silver-spoon rich boy. They said he was from “Wall Street.” They took him to task about his dog. But nobody complained about his personal demeanor.

They also didn’t complain when he lost a winnable election.

In a debate against Barack Obama where he clearly had the substance of a timely issue on his side, he allowed the moderator to run over him. He stood there like Ward Cleaver with a stupid smile on his face while CNN’s Candy Crowley effectively ended his campaign.

Romney lost for the simple reason that voters who would have voted for him had they shown up, stayed home instead. Romney made it clear in not fighting for himself that he wouldn’t fight for us. George W. Bush left office in disgrace for much the same reason.

Republicans (indeed the entire coastal-elite ruling class) not fighting for us for 30-plus years led to falling wages, declining household net worth, the exportation of tens of thousands of once good-paying manufacturing jobs, the rise of China and the decline of the middle class.

Whatever happens, it won’t be because Trump won’t fight. Trump made that clear Tuesday night. And a lot of people that the pollsters and the cable news pundits will never talk to noticed.

Trump’s detractors who deny, ignore or under appreciate that fact do so at their peril.