What leftism touches it ruins. 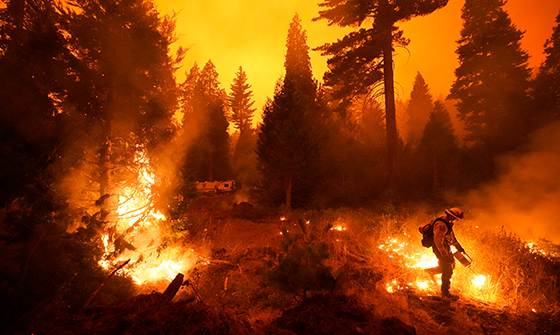 Firefighters trying to contain the massive wildfires in Oregon, California and Washington state are constantly on the verge of exhaustion as they try to save suburban houses, including some in their own neighborhoods. (AP Photo/Marcio Jose Sanchez)

It is the received wisdom among political professionals, political junkies and the political commentariat that so-called independent and moderate voters decide elections. Almost equal numbers of voters are certain to vote either for the Democrat or the Republican, leaving the independents – the “swing voters” – the experts say, to actually determine the winner.

If you are one of those in the mushy middle and if you haven’t yet decided how you’re going to vote, I offer this observation.

Leftism, such as that which now pervades the Democratic party, destroys everything it touches.

There are numerous examples, but we have only the space for two.

Example One is California — as we discussed last week. Once the richest state in the union, California is now a fiscal and sociological disaster. The millions of acres of California wildfires currently in the news are the result of decades of far-left environmentalism. The environmental lobby has acted to prevent the clearing of dead trees and underbrush from California’s forests, preferring the dead, dry foliage to be allowed to “decompose naturally so as to provide nutrients for the soil.” Fine, but for the fact that dead underbrush turns into kindling, just waiting for lightning or an errant spark to set it off.

Today, this fire season’s death toll stands at 85, while smoke over the state is so thick and widespread that streetlights in San Francisco are turning on automatically in the daytime.

California’s once-vibrant middle class is a shadow of its former self. With beleaguered middle-class families possessed of the means to do so decamping for places like Texas, California is increasingly becoming a dichotomous state consisting of the very, very wealthy and the profoundly poor – with fewer and fewer people in between.

Example Two is the media. The “press,” as we used to call it, has always had a leftward tilt. But starting in 1974, when reporters Bob Woodward and Carl Bernstein took down Republican president Richard Nixon, a full-on leftist hijacking of the press began. Every journalism school student since Watergate has been taught that journalism as a profession exists almost solely for the purpose of destroying Republicans.

Today the leftist takeover of the legacy media has been so successful that its practitioners no longer bother to offer even a pretense of objectivity. Walter Cronkite at CBS was once called “the most trusted man in America.” Today, there is exactly nobody in media that most people trust.

A report released this summer by the Gallup organization ranked the media dead last in public trust of American institutions – a list that include hospitals, local government, state government and even Congress.

The left’s debasement of California and of the media are just two examples. We could add movies, music, TV, schools and colleges and most of the country’s largest cities to the list of things that leftism has ruined.

So, you “swing voters,” do everyone this favor. Examine as objectively as you can what fully applied, hard-left liberalism brings about. And then let that examination inform your vote November 3.