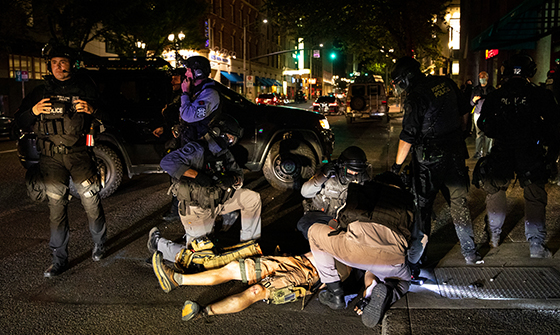 In this Aug. 29, 2020 file photo a man is attended to after being fatally shot during a protest in Portland, Ore. A surge in deadly gun violence, and an increasingly visible homeless population have many questioning whether Oregon’s largest city can recover. (AP Photo/Paula Bronstein)

I keep waiting for a mass awakening. I keep waiting for that large cohort of Americans who, though they vote for Democrats and call themselves liberals but yet remain somewhat tethered to the real world, to have an epiphany.

I’m waiting for an enterprise story in the New York Times or on ABC that examines liberal policy on the basis of its actual results. I am waiting for one of the usual talking heads to ruin Chuck Todd’s day one Sunday morning on Meet the Press and begin to admit to the failures of policies that liberals constantly promote.

For it seems that such an epiphany is overdue and, in the end, unavoidable. Any objective and sober analysis of readily observable facts reveals in stark, undeniable detail that liberalism destroys everything it touches.

We can start with our major cities. Iconic American cities like Baltimore, St. Louis, Chicago, Detroit, San Francisco, Seattle and Portland have in common that they were once clean, vibrant and prosperous. But they also have in common the fact that they have for decades been governed exclusively by Democrats.

Today they are to varying – but in every case worsening – degrees unsafe, dirty and dysfunctional. Their schools are urban hellholes from which as many as half of students never graduate. Crime is rampant. Prosperity is increasingly elusive. The resulting misery falls disproportionately upon non-whites and the poor.

Speaking of the poor. Since 1965, when President Lyndon Johnson in his State of the Union message declared, “unconditional war on poverty,” U.S. taxpayers have spent – depending on whose estimate you use – upwards of $28 trillion on a nearly uncountable list of federal anti-poverty programs. Were it not for federal spending on poverty, there would be next to no national debt.

For that massive outlay – an outlay that liberals constantly insist isn’t enough – we have gotten exactly nothing. The poverty rate in America today is essentially unchanged from the day when the War on Poverty was declared. Among the most perverse effects of the War on Poverty has been the dissolution of black families. In 1960, 24 percent of black children were born into fatherless homes. Today the rate of fatherlessness in black homes stands at a heartbreaking 73 percent.

Far from lifting blacks and other minorities out of poverty, decades of Democrat promoted-policy has served only to make poverty more difficult to escape.

There are many other examples. The bluest of the blue states are depopulating. People with the means in states like New York, California, New Jersey and Illinois are packing up and fleeing high taxes and diminishing prospects.

Home schooling has become an industry.

In my naïve brain I keep thinking that at least some nominal liberals will begin to notice all of this and thus begin the process of reexamining their liberalism. I keep thinking.

Eventually, 60 Minutes will have to run a segment addressing some of this, right? At some point, the failure of leftism will become impossible to ignore, won’t it?

I keep thinking. I keep hoping.