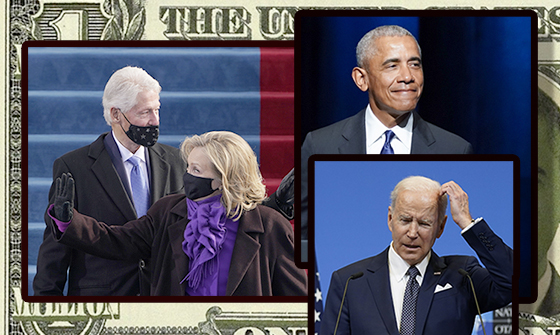 Thursday marked the one-month anniversary of Russia’s brutal and unprovoked invasion of Ukraine. News coverage of the invasion has brought many in the United States to an appreciation of the fact that Russian president Vladimir Putin is a murderous and thoroughly corrupt thug.

But thanks in large measure to an often supine and always leftist media, a majority of people in the United States underappreciate the corruption of our own politicians – most particularly our elite Democrat politicians.

Though not well covered it remains indisputably true that Democrats bearing the last names Clinton, Obama and Biden have enriched themselves both personally and politically while simultaneously enriching and emboldening Vladimir Putin.

Let’s start with the Uranium One deal. In 2010, Uranium One, which held mining stakes in about 20 percent of total U.S. uranium reserves, was sold to the Russian energy giant, Rosatom. The deal gave an enormous boost to Russia’s stated desire to become a near monopoly in world uranium production.

Because uranium is a strategic mineral, the deal required U.S. approval from the U.S. State Department’s Committee on Foreign Investment in the United States (CFIUS). Hillary Clinton was Secretary of State at the time.

Utility conglomerate Exelon Corporation is based in Chicago, owns nuclear power plants in the United States and buys uranium from Russia. Those uranium imports happen to be exempt from the sanctions that were placed on energy imports from Russia following the invasion of Ukraine. But let’s don’t read anything into the fact Exelon Corporation happens to be the largest single donor to the Obama Foundation.

Is it too cynical to believe that Ms. Baturina is untouched by Biden administration sanctions because of the $3.5 million she wired to one of Hunter Biden’s shady companies? Is it also too cynical to believe that the “Big Guy,” referred to often in Hunter’s emails and to whom Hunter was required to kick 10 percent of the action, is in fact his father, now the President of the United States?

There’s more, but we’re out of space.

The shameful truth is that the Clinton-Obama-Biden cabal has been selling us out for more than two decades. They have amassed enormous power and personal wealth while we deplorables worry about rising gasoline prices, declining real income, galloping inflation and shortages of food, housing, building materials and just about everything else. The very last thing any of them cares about is what’s good for the country.

I say shameful. The fact is no one named Clinton, Obama or Biden has any shame at all.