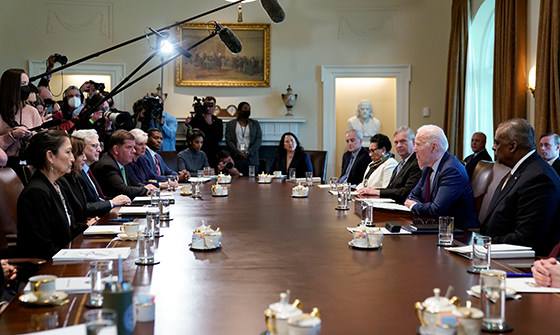 President Joe Biden speaks during a cabinet meeting in the Cabinet Room of the White House. (AP Photo/Patrick Semansky)

I didn’t go to Harvard. That would seem to disqualify me for service in the top levels of the Biden administration. Because most of the Biden cabinet went to Harvard, most notably Secretary of Transportation Pete Buttigieg and Energy Secretary Jennifer Granholm.

I was thinking about this over lunch in a neighborhood place near my home in Dallas called Cisco Grill. Cisco Grill is family owned. The owner was the general manager for the previous owner and he put everything he had in the world on the line about a decade ago to buy the place. He and his daughters now run it. It’s the very embodiment of the American Dream.

So, what does this have to do with Harvard and the top Biden administration officials?

It knits together like this. It came to me that if any of these best and brightest, highly-credentialed Bidenites had to run Cisco Grill, the place wouldn’t last six months.

That’s because for all their hifalutin’ education, none of them has the first clue as to how a small business survives and thrives.

Unlike Ivy-educated apparatchiks in government, small business owners do not have the luxury of clinging to ideology. Eventually in small business, no matter how much you like an idea, if it’s not working, you have to let it go. It’s the only way you survive.

They apparently teach nothing about small business at Harvard which explains the unwillingness of the administration to change course even though what they’re doing clearly isn’t working.

No single factor is impacting inflation more than energy prices. The cost of transportation gets cranked into the price of everything we buy. Yet Biden is trying to impose sufficient pain as to force a conversion to electric vehicles.

I’m not opposed to electric vehicles. But we can’t all own a Tesla and you can’t replace 200 million gasoline and diesel-powered vehicles overnight. Yet the administration is pursuing an energy policy as if that untenable proposition were possible.

President Biden should instead come out and say something like this:

I continue to believe in green energy and in reducing our need for fossil fuels. But I now realize that I tried to do too much too fast. So, I’m going to ease the restrictions on fossil fuels that I put in place at the start of my administration in order to give the free market time to catch up and to bring about an orderly transition in our nation’s energy policy.”

The Dow would go up 2,000 points the next day. Inflation would start to ease. Confidence would grow and, ironically, prospects for the Democratic Party would improve.

The guy who owns Cisco Grill knows this. I know this. You know it, too.

But if you went to Harvard and now work in this administration, you haven’t a clue.