Hail to the disrupter in chief. 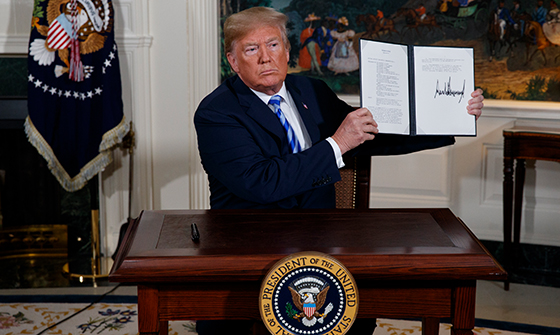 President Donald Trump signs a Presidential Memorandum on the Iran nuclear deal from the Diplomatic Reception Room of the White House, Tuesday, May 8, 2018, in Washington. (AP Photo/Evan Vucci)

The money quote from President Trump’s statement regarding his decision to pull out of the Obama-era Iran arms deal is this.

If I allowed this deal to stand, there would soon be a nuclear-arms race in the Middle East. Everyone would want their weapons ready by the time Iran had theirs.”

Any intellectually honest assessment of the “Joint Comprehensive Plan of Action” – as the Iran deal is pretentiously named – confirms what the president said. If allowed to stand, the deal virtually guarantees a nuclear-armed Iran and a resulting arms race

The central premise of the Iran deal was that the Iranian mullahs would forego their ambitions to become a nuclear power – thus leading to the lifting of economic sanctions – all in deference to the economic wellbeing of their own people. When and on what planet have fundamentalist Islamic autocrats ever cared about the economic wellbeing of their own people? The Iran deal has been in effect for nearly three years and the lives of ordinary Iranians are just as impoverished and just as hopeless as ever. The theocrats running Iran continue to commit murder at home and spread terror abroad all the while laughing at the infidels of the West – particularly that greatest of infidels, the United States.

It is beyond naïve to believe that the Iranians were ever going to abide by the terms of Obama’s ridiculously one-sided deal in return for being welcomed into the community of responsible nations. The Iranian mullahs want no part of any such “community.”

Years ago, Henry Kissinger said that Iran needed to decide if it wanted to be a nation or a cause. Iran made that choice and is sticking with it. Iran is a cause. That cause is fanatical Islam and the concomitant oppression and terror necessary to bring it about.

Iran’s leaders have no intention of ever being responsible world citizens. To the extent that the Iran deal put the brakes on Iran’s development of nuclear weapons – and the available evidence is all to the contrary – that hiatus is entirely temporary. The very deal itself is set to expire in stages on its own over the next 12 years. Best case is that the Iranians wait it out in public while continuing to work on deliverable nukes in secret.

Iran’s neighbors know this and thus have every incentive to pursue their own nuclear weapons. The president is right about an eventual Middle East arms race.

Of course, Dems, leftist European leaders and virtually the entire American national media are all, quite predictably, aghast. This fact alone should be affirming of the president’s decision.

Donald Trump has disrupted decades of elite rule in Washington, a sin for which the establishment will never forgive him. But that disruption is exactly what he promised.

The Iran deal is not a treaty. It was never voted on in the Senate. It would never have passed. Calling it the worst deal in history, candidate Trump promised to pull out of it.