Fleeing the Land of Lincoln. 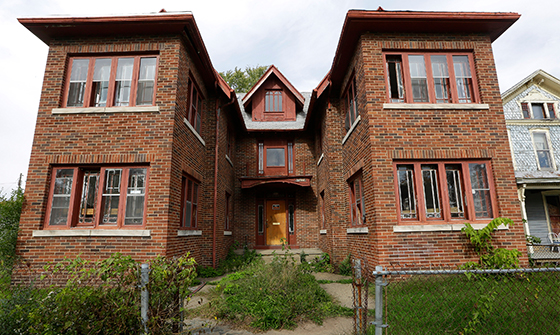 In this Thursday, Oct. 23, 2014 photo, an abandoned apartment building is locked and uncared for near downtown in Danville, Ill. (AP Photo/Seth Perlman)

During our visit last week we talked about the Seattle city council’s idiotic decision to impose a head tax on local businesses of $275 per employee per year. We reported that immediately after that city council vote, Amazon, Seattle’s largest employer, suspended work on its new office tower. Of course, it goes almost without saying that Seattle’s city council is comprised 100 percent of Democrats save for one woman who calls herself a “Socialist Alternative,” whatever far left whack-o political party that is.

We went on to talk about the now all-but-irreversible economic decline of Democrat-run cities like Baltimore, St. Louis, Newark, Philadelphia, Detroit and, notably, Chicago.

Interestingly, our piece of last week serves as an apt prelude to a story this week in Breitbart on the subject of the State of Illinois. It seems that folks are fleeing Illinois in droves – more than 71,000 net out-migration since 2016.

Chicago is, as you would expect, the biggest single contributor to the exodus. Chicago stands alone among major American cities for having consistently lost citizens for the past five years. Chicago’s troubles are vast. The city can barely pay its bills – in fact the lights stay on only because of the forbearance of the utility companies to which Chicago owes millions in past-due power bills. On top of the fiscal disaster we then add the gun and gang crime and the general lawlessness that is literally destroying the city from within.

In the State of Illinois, state and local governments keep taking a bigger bite out of their citizens’ incomes to fund massive, unsustainable pension liabilities – pensions that were handed out to Illinois public employees in return for union campaign cash to keep corrupt politicians in office.

The second question is, who is leaving Illinois? You can surely guess that answer. The people fleeing Illinois are the ones who can afford to. They’re the better educated, better employed and more talented who have options that those further down the economic ladder don’t have. They are the ones with the earnings that pay the taxes. When the tax burden becomes so great that they leave, those left behind have no capacity to take up the slack. This fact is exactly why the cities we mentioned earlier went into decline with little chance of revival.

And who dominates political offices at every level in Illinois? Again you can guess. The Illinois legislature is nearly two thirds Democratic. The Chicago city council has exactly one Republican out of 50 seats.

So, again we say, cities and states run by Democrats almost always have two things in common that combine into the cruelest paradox: They have the highest taxes and yet they’re in the worst financial shape.