The latest from academia. 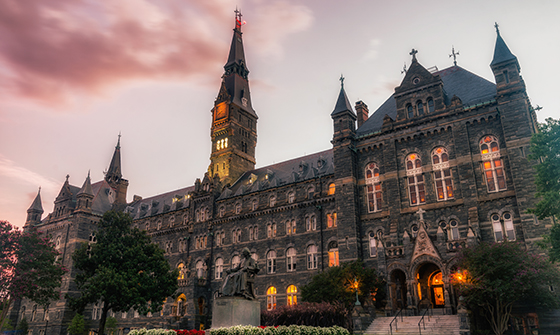 If your son or daughter wants to go to Georgetown University it will set you back, according to the university’s website, $72,214 per year. That’s almost exactly equal to the entire pre-tax income of the average household in the United States. So, if you’re going to spend your entire household income in order to send your child to Georgetown, it’s worth looking at what you’ll be paying for.

You’ll find that a portion of your money will go to cover the salary of Distinguished Associate Professor Dr. Carol Christine Fair. Distinguished indeed. Referring to Brett Kavanaugh, Dr. Fair recently shared with the world via Twitter the following:

Look at thus [sic] chorus of entitled white men justifying a serial rapist’s arrogated entitlement. All of them deserve miserable deaths while feminists laugh as they take their last gasps. BONUS: We castrate their corpses and feed them to swine. Yes.”

‘So what else is new?,’ you may ask. It’s just the rantings of another far-left whack-o college professor. True. But Georgetown – an avowedly Catholic institution – is nevertheless protecting this particular whack-o. Georgetown president John DeGioia released a predictably anodyne statement in response to very substantial outcry. He said, in part,

We protect the right of our community members to exercise their freedom of expression,” [snip] “We take seriously our obligation to provide welcoming spaces for all students to learn…,”

In other words, the usual spineless university president drivel that has come to be expected whenever a far-left member of the faculty (but I repeat myself) wigs out in public. President DeGioia’s statement did not mention Dr. Fair by name.

As to the questions, here is question one. Where in the Christian faith or in Catholic tradition is it OK to advocate for miserable deaths while people laugh? Georgetown is a Jesuit institution. How does Dr. Ford’s calling for castration of corpses comport with Jesuit practice of Ignatian spirituality that culminates in “finding God in all things?” Since the founding of the order in the 16th century, Jesuits have been teachers. How do Jesuits reconcile themselves to the teachings of a professor like Dr. Fair?

And second, on a much more secular note, if Dr. Fair had advocated the miserable deaths and the castrating of the corpses of black men, would the university’s response be equally flaccid? (It’s a rhetorical question. We know the answer.)

Oh, and here’s a third question. Why would anyone spend a year’s gross income to send a child to any university that tolerates such bile? When will the big, broad, commonsensical heartland of America rise up in righteous indignation against the $70 billion a year ‘college industry’ and cry out, ‘Enough!’?