It’s only going to get worse. 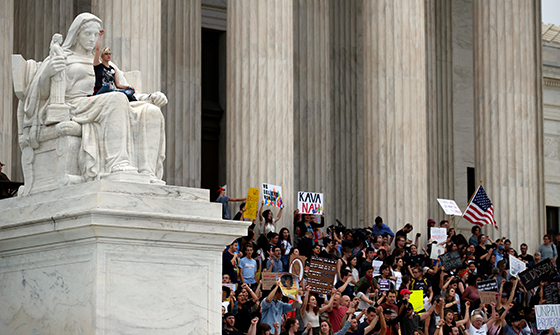 An animal in fear of its life is very dangerous. Even an otherwise mild-tempered family dog can cause serious injury if it thinks it is fighting to save itself.

It is in that light that we see today’s Democratic Party. The confirmation of Brett Kavanaugh was just the latest in a string of serious setbacks for the American Left. The Left fought so viciously over Kavanaugh because of their keen awareness that much of their policy success over the past half century has come via diktat from unelected black-robed federal judges rather than via the duly elected representatives of the people of a democratic republic. The Left could not and cannot get done via the legislative process what it has gotten done via the courts. They therefore understand the stakes attendant to Supreme Court nominations. They recognize the impediment to their agenda represented by a constructionist, constitutionalist majority on the high court.

The Left’s Kavanaugh defeat comes following nearly a decade of Democratic losses in state legislatures and governors’ mansions. During President Obama’s two terms, Democrats lost a thousand state legislative seats while watching the ranks of Democratic governors plummet from 28 to 16.

As a result of gains made since 2010, Republicans today are dominant at the state level. They enjoy the trifecta – control of both state legislative chambers and the governorship – in 26 states. Democrats can make that claim in only eight.

Then, of course, Democrats lost the big one. Donald Trump defied the received wisdom of very nearly every political pundit on Earth and snatched electoral victory from the grasping hands of Hillary Clinton. The Left has been in a rage ever since.

Starting with vagina hats at women’s marches on Inauguration Day and continuing to the present day’s chasing of Republicans from restaurants, the cornering of Republican members of Congress on elevators and the harassing of their spouses and children at their homes, the Left has lashed out in ways that we’ve never seen. This behavior has been on display from the rent-a-mob crowd that pawed at the doors of the Supreme Court last week all the way up the Democratic food chain to Hillary Clinton who, commenting on a call for a return to civility, offered this gem:

You cannot be civil with a political party that wants to destroy what you stand for, what you care about. That’s why I believe if we are fortunate enough to win back the House and/or the Senate, that’s when civility can start again.”

Translation: We’re going to keep acting out until we’re back in charge.

That may take awhile. Whatever happens in the midterms, the Left has a long road back to where they were in 2008. They are instinctively aware that their effectiveness as a political force is gravely wounded and they’re acting accordingly.

Thus, we can be certain of two things. One, the unhinged attacks are only going to get worse. And two, this midterm really is for all the marbles.