Days of merry and bright. 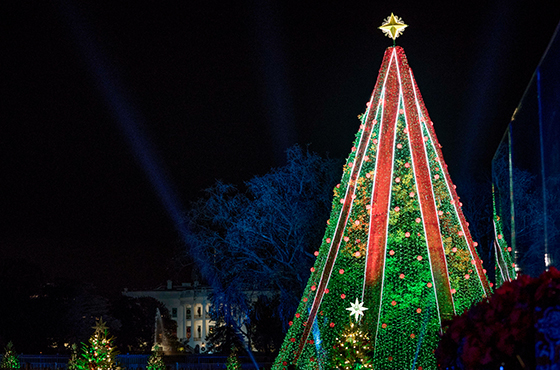 The National Christmas Tree is lit following a ceremony at the Ellipse near the White House in Washington, Wednesday, Nov. 28, 2018. (AP Photo/Andrew Harnik)

Economists say that this Christmas season promises to be one of the best on record. Yes, of course, Christmas is first and foremost a religious observance. But there’s no escaping that it’s also an important economic indicator.

On that front, the indications are great. Retailers are seeing brisk sales, with most retail sector watchers saying that this season is going to be the best ever. Holiday season travel is set to break records. Across the country the mood is indeed merry and bright.

More people are working. Wages are up. Taxes are down. There’s more money left at the end of the month for more families and that means fuller stockings and more presents under the tree.

It’s worth reminding ourselves that this is what prosperity looks like. For most of a decade we as a nation became, by increments, inured to a flatline economy. We came to expect, and thus increasingly accept, stagnant incomes even in the face of rising prices for lunch, a new dress, a new pair of shoes, a fresh set of tires and all the other things we have to pay for no matter what.

We were lectured by the previous administration to the effect that flaccid, lackluster, economic growth constituted America’s new normal. We were admonished to get used to a shrinking middle class. The Ghost of Christmas Future, we were encouraged to believe, should be properly expected to be a bit thinner and bit more pale than the Ghost of Christmas Past.

All of that went out the window with a change of administration. With alacrity we never expect from politicians of any stripe, the Trump administration began unshackling the American economy. Using the same pen that Barack Obama used to push policy and regulation that was choking American business, Donald Trump began signing executive orders to remove regulation. He promised the elimination of two regulations for every new one put in place. The actual ratio has turned out to be closer to seven or eight to one.

Add to that deregulatory Christmas tree the star on top in the form of tax rate cuts for companies and individuals, and you arrive at the very brisk Christmas season in which we now find ourselves. Christmas is the season of miracles and we should thus remember that the American economy is capable of miracles if left unimpeded by taxes, regulation and the incessant meddling of power hungry, vote pandering politicians.

As we lay President Bush to rest this week the media has been waxing eloquent on his “decency” and “gentle good humor.” The implied unfavorable comparisons to the current president have been hard to miss.

But this much is true like it or not. Given the institutional opposition he faced in the form of the media and the Washington establishment, only a guy with a personality like that of Donald Trump could have gotten these results this fast. Nobody named Bush could have done it. Nobody named Clinton would have even tried.