Where was Donald Trump Tuesday night? 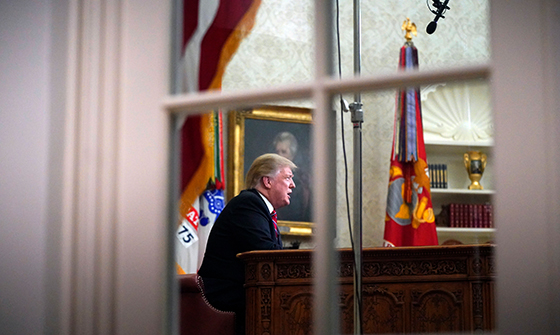 As seen from a window outside the Oval Office, President Donald Trump gives a prime-time address about border security Tuesday, Jan. 8, 2018, at the White House in Washington. (AP Photo/Carolyn Kaster)

The howling from the Left and the northeast liberal media notwithstanding, everything that President Trump said in his Tuesday night Oval Office address on border security is true. And please let me be clear, I mean true in the broad and consequential sense. If some lefty pundit wants to get down in the weeds and say that such and such statistic is actually “X” when the president said, “Y”, that doesn’t rise to the level of factual error. Such hairsplitting is of no consequence. For purposes of considering the fraught subject of border security, the president told the truth Tuesday night.

There is a crisis on the southern border. Border security has been promised multiple times by multiple administrations over a period of 25 years — all to no avail. Chuck Schumer, Nancy Pelosi and other well-known Democrats have voted in the past for a border wall. These things are all true, just as the president said.

The problem at the border is real. Yes, many of the people who enter do so hoping to make a better life for themselves. But the porous nature of our southern border means that drugs and criminals and gang members also enter the country, just as the president said.

These are unassailable facts. And therefore, the president’s Oval Office address passes any objective smell test. What he said is true.

Yet the address was, to my view, a total bust. In the words of one wag, it looked like a hostage video. He offered us a rather poorly done version of a traditional presidential Oval Office address. Not a single mind was changed.

That’s not what the voters who elected Trump signed up for. Trump voters signed up for the guy who speaks extemporaneously in plain language. That capacity to speak plainly and passionately did change minds. That’s why real estate mogul and reality TV star Donald Trump is now President Donald Trump.

RELATED: Trump has no choice but to be Trump.

Trump voters voted for Donald Trump and Donald Trump didn’t show up Tuesday night, some wooden facsimile of him did.

Mr. President, a word of advice if you’ll permit me. If you want to get your border wall and keep your campaign promise, be the guy that triumphed over 16 Republican rivals on the way to defeating the undefeatable Hillary Clinton.

Promise those of us who, from time to time, really do flinch when you speak to never speak from a prompter again. That was your predecessor’s schtick and he was a helluva lot better at it than you.

We don’t want his schtick. We want your schtick. It’s what got you here and it’s the only thing that will keep you here.