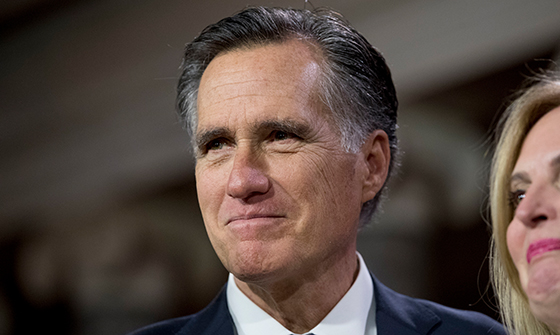 Newly-elected Utah senator and failed presidential candidate Mitt Romney graced us with a virtue-signaling New Year’s Day sermon in the Washington Post that takes President Trump’s character to task. Among the gems in Senator Romney’s piece is this one.

A president should demonstrate the essential qualities of honesty and integrity, and elevate the national discourse with comity and mutual respect.”

Well, Senator, let’s say that I agree with you. Where is there to be found any comity or mutuality of respect among Democrats? Have you been living under a rock? Have you somehow missed the unending stream of lies and vitriol that has been directed at Donald Trump by Democrats and the media from the very day that he announced his candidacy?

Were you on vacation in the family station wagon with the dog on the roof during the Brett Kavanaugh hearings?

Or is it possible that you’ve been on another planet for the past two and a half years? Does that explain how you seem unaware of the activities of James Comey, Andrew McCabe, Peter Strzok, Lisa Page and others at the FBI and Department of Justice? Are you blind to the fact that these high-level officials, at the apparent direction of President Obama, unleashed the awesome power of federal law enforcement in an attempt to bring down Trump’s candidacy and later his presidency?

Your displeasure at President Trump’s comportment might carry some weight if you displayed even a scintilla of moral outrage at what appears to be actual crimes committed by President Trump’s opponents. Instead, you take Trump to task?

Let me remind you, Senator, that Donald Trump won his election. He is the only Republican in the 2016 field who could have done so. Had he not run, and not campaigned the way he did, we would be suffering the presidency of the execrable Hillary Clinton. Does Mrs. Clinton, with her long and undeniable record of lies, scandal, self-dealing, pay-for-play and assorted other corruption somehow strike you as a person of the “integrity” about which you wax so rhapsodic? (Have you seen the footage of Mrs. Clinton lying right to the faces of the grieving families of those killed in Benghazi, Libya – on her watch?)

Senator, your brand of snobby, condescending elitism is the very reason that Trump won. You are the embodiment of a Republican who promises conservatism but never delivers.

You lost your presidential bid because you won’t fight. Trump won his because he will. That willingness to fight is the reason that millions of middle-class families in the heartland at last have hope after the long dismal years of Obama.

Donald Trump isn’t always my cup of tea either, Senator, but he has kept his promises. He is governing as a conservative. That’s more than we’ve had from a Republican in a very long time. If his sometimes intemperate style is the price that must be paid for that fealty, I and about 63 million of my fellow citizens will be happy to pay it.