Give him a pass (on this one). 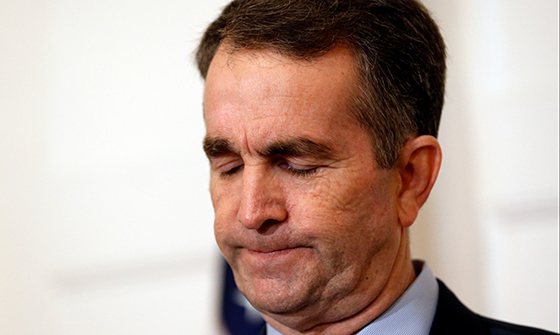 Virginia Gov. Ralph Northam pauses during a news conference in the Governor’s Mansion in Richmond, Va., on Saturday, Feb. 2, 2019. Northam is under fire for a racial photo that appeared in his college yearbook. (AP Photo/Steve Helber)

The word schadenfreude means “enjoyment obtained from the troubles of others,” an example of which is watching Democratic Virginia governor Ralph Northam squirm. As you’ll recall, it recently came to light that Gov. Northam is seen in photographs in his medical school yearbook dressed up in blackface. Of course, calls for his resignation went up immediately.

The schadenfreude arises from still-fresh memories of the pure hell to which Supreme Court justice Brett Kavanaugh was subjected over uncorroborated, ever-shifting allegations of sexual misconduct dating back to his high school days. You’ll remember that there were no pictures of Brett Kavanaugh, no physical evidence at all. His accuser couldn’t even say with any certainty where or when the misconduct occurred. Nevertheless, Kavanaugh and his family were made to suffer extreme duress during his confirmation hearings.

It’s nice, then, to see Democrats put on the spot – in this case for real or perceived racism. (That’s something with which Republicans are charged daily. It’s refreshing to see the shoe on the other foot.)

But as enjoyable as schadenfreude is, it’s an empty and pointless emotion. For his appearance in blackface years ago, I believe that Governor Northam should be given a pass. Except in the most egregious cases – and by egregious I mean actual crimes like murder, rape and aggravated assault – there ought to be, for political purposes, a statute of limitations on youthful stupidity. If you did something stupid once, and haven’t done it since, you ought to be left alone.

In the absence of such tolerance, most of us are politically indictable for any number of idiotic things we did or said while in high school and college. Most of us grew out of it and have led decent, productive lives. Yet, the internet has enabled the digging up of ancient dirt on just about anyone. If a late inning revelation of such dirt on a politician is enough to overturn an election or derail a political career, fewer people will run for office.

A shrinking political talent pool will have the effect of leaving us to choose from candidates who literally can’t get a job doing anything else. Successful people, who late in their careers might otherwise be willing to bring their accumulated experience to public office, won’t be willing to risk having some ancient misdeed dug up and used to ruin their reputations.

So, give the governor a mulligan on the blackface. Let his election stand.

But, if he wants future elective office, let him face the voters and account for something much more consequential than a sophomoric yearbook photo. Make him explain to voters why he thinks it’s OK to electively kill viable babies. That question arises not from some decades old act of youthful indiscretion. It arises from a position taken on pending legislation two weeks ago. Let the voters decide on that. Let them render a verdict on the Ralph Northam of the here and now.

Let them, in so doing, render a verdict on themselves.