A call to greatness. 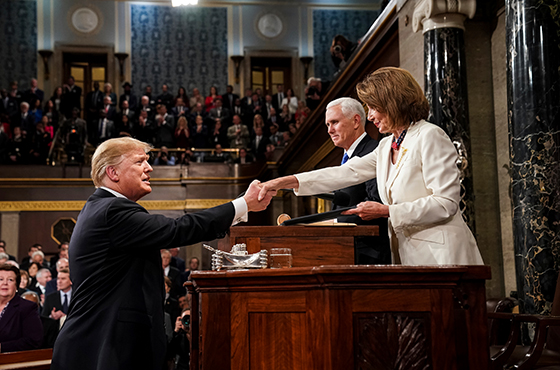 President Donald Trump shakes hands with House Speaker Nancy Pelosi as Vice President Mike Pence looks on, as he arrives in the House chamber before giving his State of the Union address to a joint session of Congress, Tuesday, Feb. 5, 2019 at the Capitol in Washington. (Doug Mills/The New York Times via AP, Pool)

Tuesday’s State of the Union address was a triumph for President Trump. It was, subjectively and objectively, the best speech of his presidency.

From its opening stanzas it was clear that the president made the right decision when Speaker of the House Nancy Pelosi disinvited him during the budget shutdown. Many on the right were calling for the president to send a written message to Congress while holding a public, rally-like State of the Union event somewhere in the heartland.

The president held out for the House chamber – with its attendant majesty and tradition. It was the right call.

To be certain, the Democrats went a long way to make the president’s job easy. Their recent embrace of a horrifying position on abortion – a position rejected by close to 90 percent of the public according to recent polls – opened a lane for the president to resonate across party lines. Said the president:

Let us work together to build a culture that cherishes innocent life. And let us reaffirm a fundamental truth: all children — born and unborn — are made in the holy image of God.”

Expect to hear that line a lot in 2020. Expect it to resonate with many Catholics who voted for Hillary Clinton in 2016.

The recent hard-left lurch by Democrats opened another lane:

Tonight, we renew our resolve that America will never be a socialist country.”

But so did the president’s reminder that on the 100th anniversary of women’s suffrage in the United States, there are more women in Congress than ever before. Even Nancy Pelosi and her posse of vestals clad in white had to stand and applaud that one.

Most important, however, Trump did, Tuesday night, what presidents are hired to do – call the country to be its best. When he opened with a reference to the coming 75th anniversary of D-Day I was a bit puzzled. But when he brought it full circle by tying the triumphs of those who have gone before to the triumphs that await those now here, he got the country behind him. To the dismay of the talking heads on CNN and other places, a snap poll revealed that fully three quarters of the country approved of the speech. As a pal said today, “It’s hard to get 75 percent agreement that puppies are cute.”

There were many great moments in the speech – too many to cover here. But if I had to pick a favorite it’s this one:

This is our future — our fate — and our choice to make. I am asking you to choose greatness.”

More of that please, Mr. President. It works.