The problem that’s not going away. 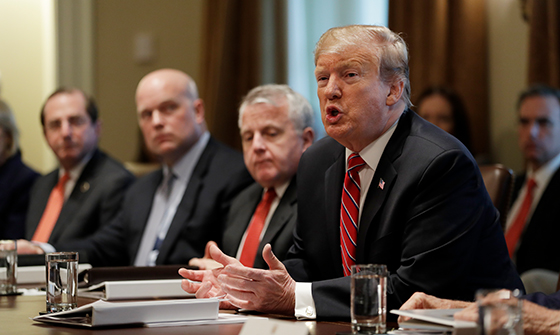 Late last year, President Trump told members of his cabinet to seek a five percent reduction in the budgets of their respective departments. Do the math on that directive and you come up with $70 billion. Good for President Trump. That’s real money.

Except that it really isn’t. Not when you’re running budget deficits in excess of $900 billion. Cutting the budget deficit by less than eight percent is not going to have any meaningful impact on the reckoning that is surely coming if America doesn’t address its rapidly expanding debt.

For eight years in this space we were quite critical of the Obama administration on this subject. You may recall that candidate Barack Obama called President George W. Bush “unpatriotic” for the rate at which Bush had expanded the debt. Said Obama:

The problem is, is [sic] that the way Bush has done it over the last eight years is to take out a credit card from the Bank of China, in the name of our children, driving up our national debt from $5 trillion – the first 42 presidents – [sic] number 43 added $4 trillion by his lonesome so that we now have over $9 trillion of debt. [snip] It’s unpatriotic.”

Well, that turned out to be mere chump change. During his tenure, Barack Obama racked up more debt than all presidents that preceded him combined – including Bush 43. Mr. Obama left office with the national debt at a staggering $20.2 trillion.

But to be entirely fair to Barack Obama, it’s necessary to extend criticism to Donald Trump. Start with the debt that he inherited from Obama and add to it the $2.5 trillion that it is now estimated that he will add by the end of 2019. Math is math and when you do it, you find that President Trump is racking up debt at a pace only slightly less than that of his predecessor.

There are two unassailable truths about all of this. First, at some time in the future, the debt is going to bite us in the you-know-what and it’s going to bite hard. Paul Volcker said as much 30-odd years ago when he was fed chairman. The fact that we remain prosperous and so far not bitten will only serve to make the biting that much harder when it happens.

Significantly changing Social Security and Medicare has to be on the table and so far, the president has shown little interest in addressing either. The day is coming when that will have to change.

It is entirely possible that absent doing so, the president’s very significant economic and policy accomplishments will be forgotten by history – to be replaced by a very harsh verdict on his dereliction in not addressing what is certainly an existential threat to our republic.