All Aboard the Democrat Free Stuff Crazy Train! 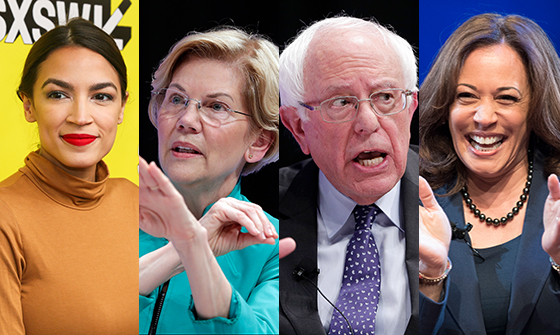 It’s already campaign season for Democratic presidential hopefuls and the Free Stuff Crazy Train is boarding now on Track 2020 in Grand Liberal Terminal. We can thank former barmaid turned New York Democrat representative Alexandria Ocasio-Cortez. She got the Crazy Train on the track by proposing the Green New Deal – a 21stcentury mashup of far-left loon ideas more grand than the FDR New Deal, the Manhattan Project and the Apollo lunar landings all rolled up into one. A giant lefty Bacchanalian wet dream.

Back when Democrats were merely wrong, rather than clinically insane, the Green New Deal would have died in its crib. Harry Truman would have tossed it in the circular file. John F. Kennedy would have dismissed it out of hand. The same for LBJ and Jimmy Carter and even Bill Clinton.

Yesterday’s Democratic leaders in Congress wouldn’t have given it a second look. House Speaker Sam Rayburn would have laughed out loud. Senator Daniel Patrick Moynihan would have been aghast. Tip O’Neill would have poured himself another bourbon and had a good chuckle.

But that Democratic Party has gone the way of rotary phones, TV picture tubes and 45 rpm records. What we have in its place is a party filled with wannabes who claw, fight, elbow and hip check each other trying to be the one farthest to the left.

And they’re all jumping aboard the Free Stuff Crazy Train to crisscross the fruited plain handing out goodies. “Unable or unwilling to work?,” asks Rep. Ocasio-Cortez. No problem. You’re still entitled to “basic economic security” (read: money for doing nothing). Want to go to college? Simple. Go sign up. It’s on the house.

On the subject of college, if you’re still paying student loans, Senator Elizabeth Warren says we, the taxpayers, will be happy to forgive up to $50,000 of your debt.

Need to see a doctor or have surgery? Make an appointment but leave your wallet at home. Health care is a right, says Bernie Sanders. Medicare for all. What could go wrong?

Is the rent for that apartment you really want just a bit too rich? Don’t sweat it. Sen. Kamala Harris is going to give you a tax credit for any amount you spend on rent that exceeds 30 percent of your income.

Someone at this point always asks the boring question, “Who’s going to pay for all of this?” Senator Warren has that answer. She’s going to enact a 70 percent tax on all income in excess of $10 million. That would raise an estimated $700 billion over ten years. As to the remaining thirty bazillion-zillion? Well, uh…I’m sure she’ll get back to us on that.

The Free Stuff Crazy Train is leaving the station and coming to your town soon. Laugh if you want. But don’t just dismiss it. That the Crazy Train was at one time unthinkable but is now very real is very real reason for serious concern.