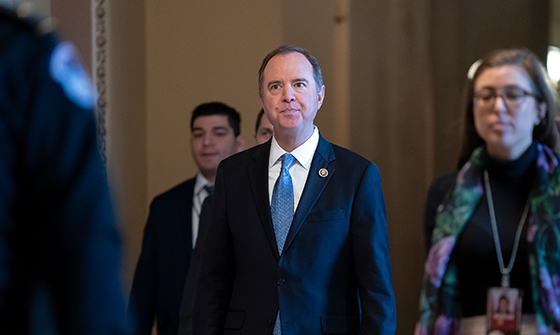 If you have similar memories and a well-functioning imagination, imagine your worst nightmare of a Tuesday-Thursday college class made two thirds longer – a soul-destroying two and a half hours. Create that picture in your mind, complete with your recollection of the fact that when you and I were in college, we did not have the ready diversions of smartphones, tablets and laptop computers. In a crushingly dull class, we had to just sit there and take it.

Now, imagine that that classroom of yours is brimming with TV cameras ready to catch you daydreaming or dozing off.

Imagine those days of endless Tuesday-Thursday class lectures writ large and then put on TV for the consumption of those wishing to catch you in an unguarded moment (of severe ennui) – and you can somewhat imagine what it had to be like in the Senate chamber Wednesday when Adam Schiff gave the House’s opening statement in the Donald Trump impeachment trial.

Since the Democrats have no case – as anyone with a functioning brain stem can see and as is being made clear by their non-stop whining about the need for witnesses that they, themselves could have called but didn’t – it then becomes possible to believe that the Democrats are hoping that Senate Republicans, desperate to be relieved of mind-melting boredom, will vote to remove President Trump from office just to make it stop.

If you watched this farce – which is to say if you either don’t have a job or are obligated as a hazard of your job to suffer such codswallop – you saw a somewhat unstable man in the form of Representative Adam Schiff taking up the time of the World’s Greatest Deliberative Body. You saw him repeating the same vacuous, focus-tested, CNN-ready soundbite statements ad nauseum.

It wasn’t just dull, it was cosmically dull. There wasn’t a hint of drama. There was nothing compelling. Certainly, there was nothing that would convince an impartial observer to remove a sitting president from office and overturn a duly constituted national election.

For three years now, starting with the Mueller Russian “collusion” investigation, Adam Schiff has been over-promising and under-delivering. Senate Minority Leader Chuck Schumer’s – and the media’s – pro-forma gushing analyses notwithstanding, Schiff made a fool of himself Wednesday. He disgraced the House of Representatives and he disgraced the Constitution. His impeachment trial opening statement will go down as one of the worst, most pointless episodes on the floor of the Senate in that body’s 231-year history.

Is it any wonder, then, that as impeachment drags on, President Trump’s poll numbers only get stronger?