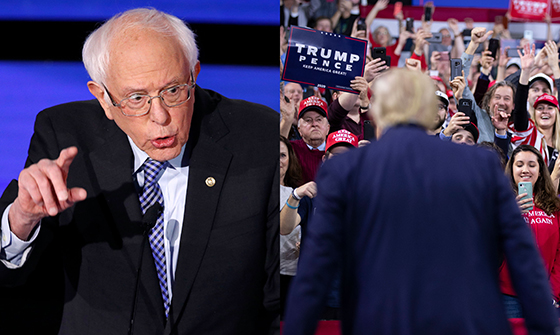 This past Tuesday night (Jan 14), two events took place simultaneously that gave us a glimpse of the November contest between President Donald Trump and the eventual Democratic Party nominee. The contrast was stark.

In Milwaukee, President Trump held one of his signature rallies. To a packed house at the University of Wisconsin Panther Arena, and with untold numbers standing outside unable to get in, the president rocked the house. Wisconsin, you will recall, was at one time considered one of the bulwarks of the fabled “Blue Wall” – the 18 states that pundits have always told us are an Electoral College sure thing for any Democrat running for president.

Hillary Clinton was so sure that Wisconsin was in the bag that she never bothered to campaign there. (It should be remembered, however, that her much more politically savvy husband, Bill, wasn’t so sure.) But Donald Trump did campaign in Wisconsin and in doing so, he struck a nerve.

Wisconsin is one of those flyover states – to which Democrats condescend – that was hit particularly hard by blue collar job losses. Many economists believe that the combination of the North American Free Trade Agreement and the admission of China into the World Trade Organization clobbered manufacturing in Wisconsin.

Donald Trump promised to put an end to NAFTA and to bring China to heel. Just this week, as Trump rallied in Milwaukee, the USMCA deal that replaces NAFTA is tee’d up to be ratified. That follows the signing Wednesday of a new trade deal between China and the U.S. Even some of the president’s critics are saying that the China deal is the first trade deal that holds any real chance of checking China’s trade malfeasance.

Promises made, promises kept, said the president in Milwaukee. The crowd roared. By every measure, workers in Wisconsin are doing better than they have in 20 years and many of them are happily giving Trump the credit.

Even though the Democrats are holding their convention in Milwaukee this summer, it is very likely that Wisconsin will again go for Donald Trump – and this time by a larger margin.

Meanwhile, in Des Moines, Iowa, where the 2020 campaign officially begins with the Iowa Caucuses less three weeks from now, the Democrats were holding a snooze fest trying to pass itself off as a candidate debate.

CNN sponsored and moderated the debate and, predictably, tossed nerf balls and marshmallows at the candidates in lieu of tough, substantive questions. The only real “debate” – if you could dignify it with that label – centered on just how much farther the government should stick its nose into our health care. The ratings, to no one’s surprise, were dismal.

So, there it was, on the same night. Rocking, pulsating, electric energy in Milwaukee. Sleepy, predictable leftist policy pabulum in Des Moines.