COVID-19 and the blue state blues. 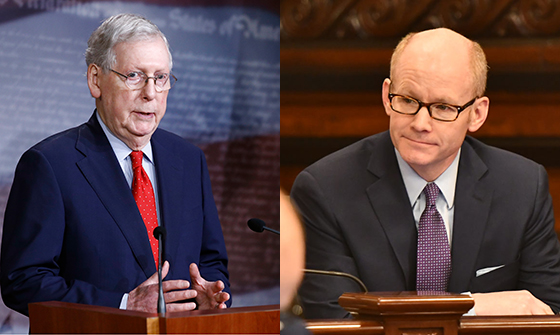 Recently, Dan Harmon, the president of the Illinois state senate, wrote a letter to that state’s Congressional delegation in Washington urging the state’s representatives to seek $41 billion in federal aid.

Illinois, like every state in the union, has taken a huge financial hit as a result of the COVID-19 pandemic. As a result, just as Congress sent money to the states in the wake of the 2008 financial meltdown, the odds are that such will happen again in the wake of COVID-19.

The wisdom and advisability of such action can be debated by people of goodwill. Let’s resolve to explore that debate one day. But for now, let’s simply acknowledge that the states have been slammed and are hurting for money. If Congress is going to address that hurt, Senator Harmon of Illinois can’t be blamed for wanting as much help as can be gotten.

But here’s where the trolley goes off the track.

Of the $41 billion that Harmon wants from Congress, he wants a quarter of it — $10 billion – to go toward bailing out Illinois’s grossly underfunded public employee pension system. That underfunding has exactly zero connection to the coronavirus outbreak.

Illinois’s public employee pension system is in deep trouble. Its obligations exceed its resources to the tune of about $130 billion. For some perspective, consider that the state’s entire operating budget for fiscal year 2020 is just $40.8 billion.

As a result of this crushing pension deficit – and not because of the COVID-19 pandemic – Illinois’s fiscal future is bleak. That grim reality has been decades in the making and has been brought about by the grotesque profligacy of the state’s Democrat-dominated legislature.

Illinois is not alone. Legislatures and public employee unions in deep-blue states that include New York, California and others, operate co-dependently in a feedback loop in which Democratic lawmakers vote in lavish salaries and benefits for unionized state employees in return for lavish union campaign contributions. Those contributions help Democratic lawmakers remain in power, which in turn ensures continued lavish salaries and benefits for state employees. As to the citizens who must pay for it all, who cares?

Senate Majority Leader Mitch McConnell is having none of it. McConnell correctly said that states would be more than happy for the federal government to borrow gobs of money from its unborn citizens in order to send money to states right now.

McConnell went on to float the idea of states declaring bankruptcy as a way of shedding the bitter fruits of their profligacy. “Oh, the humanity!,” shrieked the media.

But McConnell is right. Illinois, and blue states like it, were fiscal basket cases long before COVID-19. State lawmakers that try to hide decades of irresponsibility and cynical self-dealing behind a crisis like the current one should be ashamed of themselves but, of course, never will be.

One thing is certain. The fiscal straits of blue states like Illinois are not the fault of – nor the responsibility of – any taxpayer in Texas or Kentucky.