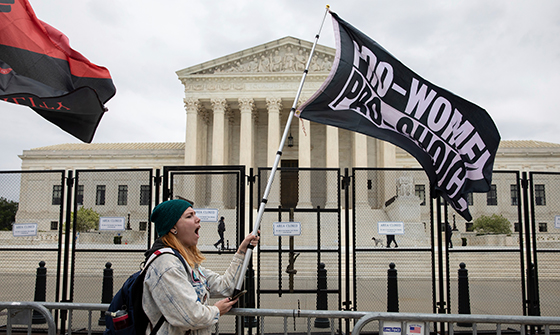 Do you remember the Senate confirmation hearings for soon-to-be Supreme Court Justice Katanji Brown Jackson back in March? Do you remember this exchange between Jackson and Senate Judiciary Committee member Marsha Blackburn of Tennessee?

BLACKBURN: Can you provide a definition for the word, ‘woman?’

JACKSON: Can I provide a definition? No. I can’t.

JACKSON: Not in this context. I’m not a biologist.

Suddenly we were forced to understand that in the absence of a degree in biology – which most of us don’t have – we couldn’t know for certain what a woman is.

And to think that for 24 years I have confidently believed that I’m married to one. From boyhood I have believed that I can spot one from a distance. Listening to Katanji Brown Jackson, however, I learned that it’s not that simple.

But just as confusion was settling over the land, a shaft of light cut through the gathering darkness. In a bit of irony, the source of that light turned out to be the Supreme Court.

Thanks to a leaked draft opinion that indicates that the high court is poised to overturn Roe v. Wade – the 1973 decision that nullified every state abortion law in the country – the inability to ascertain what a woman is (in the absence of a degree in biology) is beginning to clear up. With that draft Supreme Court opinion in hand, Democrats, for their part, now seem absolutely certain.

HARRIS: Because what we are seeing around this country are extremist Republican leaders who are seeking to criminalize and punish women for making decisions about their own body.”

SCHUMER: A hundred million women Americans right to control their own bodies and they’re focused on a leak.”

JEFFRIES: The freedom for a woman to make her own health care decisions…”

YELLEN: I believe that eliminating the right of women to make decisions about when and whether to have children would have very damaging effects on the economy…”

PELOSI: Here we are on Mothers Day, a week where the Court has slapped women in the face in terms of disrespect…”

You can make a drinking game out of listening to hyperventilating Dem politicians, the talking heads at MSNBC, and a veritable army of shrieking protesters on the front lawns of Supreme Court justices, confidently using the word, ‘woman.’ Where only a few weeks ago the Left was unable to define the word, they now seem to have achieved perfect clarity.

But if you’re still confused as to the definition of the word, ‘woman,’ here it is.

A woman is someone capable of becoming pregnant and who might then need an abortion.

Aren’t you glad we’ve finally cleared that up?