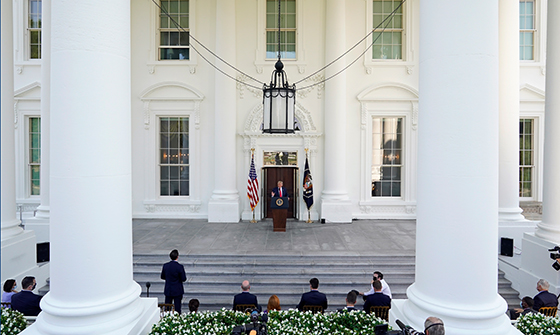 President Donald Trump speaks during a news conference on the North Portico of the White House, Monday, Sept. 7, 2020, in Washington. (AP Photo/Patrick Semansky)

Over the Labor Day weekend President Trump held a somewhat impromptu 45-minute news conference on the North Portico of the White House. I happened to be in the car and I heard most of it.

As I listened I was struck by a number of things. First, many – one might say most – of the reporters who asked questions of the president weren’t asking questions at all. They were engaging in debate. Hostile debate.

Because of my innate interest, coupled with the way I make my living, I have been listening critically to presidential pressers for a long time. It is a feature and not a bug that some degree of contentiousness pervades the relationship between the press and the president they are covering. Some sparring is par for the course – necessary actually.

But not like this. Never have I seen such blatant, undisguised disrespect from the White House press corps. The personal disdain that these people have for this president is palpable. They make no effort whatsoever to hide their animus. President Richard Nixon, in those last awful months of his presidency in 1974, wasn’t treated this badly.

Another thing that struck me as I listened is the fact that despite how badly he is treated, Donald Trump nevertheless makes himself available for questions from the media more than any president in recent memory. His comings and goings from the south lawn of the White House offer an example. He almost never boards or disembarks from Marine One without holding a micro press conference – what those in the trade call a “gaggle.”

I can’t prove this, but I’d be willing to bet that Donald Trump has taken more questions from the media in 44 months than his two predecessors combined took in 16 years. Barack Obama would go months without taking media questions. Donald Trump seldom goes more than 48 hours.

And that leads to the third thing. Contrast all of this with Joe Biden. Biden, after a long hiatus, answered questions from the media twice last week. Prior to those two events, he hadn’t answered a press question for more than a month. Given the rarity of the opportunity, one might think that those in the media following him would press hard when given the chance.

The infrequent press questioning that Biden receives is softball city – the very antithesis of that which Trump receives. Many of the questions are, in fact, also not questions at all but rather set-ups for Biden to amplify on something he’s already said. My favorite example of this from last week comes from Ed O’Keefe of CBS, who asked Biden why he wasn’t “angrier” at Trump’s disrespect for fallen World War I soldiers as alleged in a recent hit piece in The Atlantic magazine (a piece that is rapidly becoming discredited).

Alas, it is no surprise that the media is in the tank for Biden and out to get Trump. But that doesn’t make it any less of an outrage.