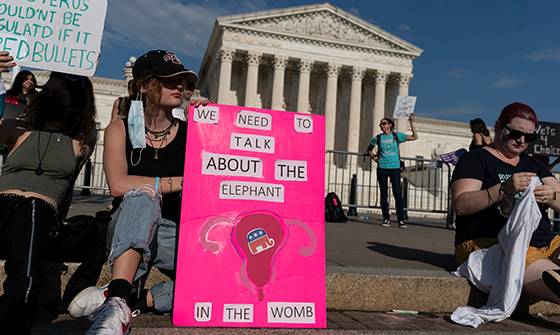 Demonstrators protest outside of the U.S. Supreme Court Wednesday, May 4, 2022 in Washington. (AP Photo/Alex Brandon)

Earlier this week, Politico.com published a leaked draft of what appears to be a potential majority opinion of the Supreme Court that could overturn the high court’s 1973 Roe v. Wade decision.

Immediately, countless thousands of lefty heads exploded. The hysteria on the Left – particularly among coastal elites – would be laughable if the subject matter weren’t so serious.

Here are a couple of choice examples, starting with President Biden.

What are the next things that are going to be attacked? Because this MAGA crowd is really the most extreme organization that’s existed in American history.”

With all due respect Mr. President, a couple of things. First, MAGA isn’t an organization. There is no national MAGA headquarters. One cannot donate money to, or volunteer for, MAGA. MAGA consists of nothing more than the 63 million Americans who voted for Donald Trump in 2016 and the 74 million who voted for him in 2020.

Second, with respect to extremism, you seem to have forgotten the Weather Underground, Students for a Democratic Society and the Symbionese Liberation Army on the left, and the Ku Klux Klan and the Aryan Brotherhood on the right.

And last, calling 74 million people who voted against your party extremists seems out of sync with the ”unity” you promised us at your inauguration.

Again, with due respect, Madame Vice President, Justice Samuel Alito’s draft opinion does no such thing. I have read all 96 pages of it (unlike you, madame, I am certain), and boiled down it simply says what informed detractors of the 1973 Roe v. Wade decision have been saying for nearly 50 years.

It is time to heed the Constitution and return the issue of abortion to the people’s elected representatives. [quoting Justice Antonin Scalia] ‘The permissibility of abortion, and the limitations, upon it, are to be resolved like most important questions in our democracy: by citizens trying to persuade one another and then voting.’”

It’s that whole thing about having to persuade that has the Left in a tizzy. The Left can read a poll. According to Gallup, 19 percent of Americans believe that abortion should never be legal, and another 48 percent believe that it should be legal only under certain circumstances. That’s two out of three. That’s a lot of persuading the Left knows they can never get done.

The Left finds it inconvenient that we live in a constitutional republic comprised of 50 sovereign states. What’s more, the Left has no interest whatsoever in trying to persuade anyone of anything. They live by diktat. That’s why they like an activist court.

Alito’s leaked opinion is the very antithesis of judicial activism. And that’s why lefties like Kamala Harris are so freaked out.