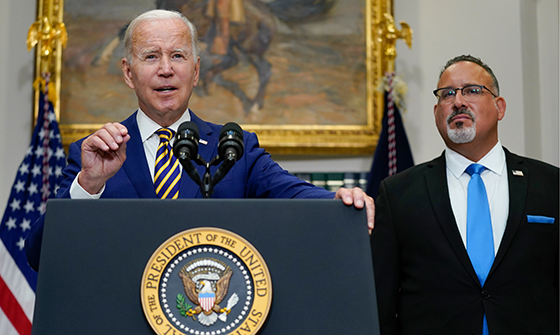 The Joe Biden Idiotic Policy Parade continues. It rolled down the street Wednesday when the president was allowed near a microphone to announce that he’s forgiving $10,000 of student debt for persons making $125,000 a year or less.

By the mere act of Joe Biden saying so, millions of individuals went to bed Wednesday night owing $10,000 less than they owed that morning when they woke up.

For the sake of this discussion, let’s skip over the fact that the president has exactly zero constitutional or statutory authority to cancel an obligation owed to the taxpayers of the United States. He can’t just wave his hand and eliminate the obligation altogether. Only Congress can do that.

But like I said, let’s skip over that and focus instead on the two real questions.

First: On what planet is this a good idea? Here’s what Biden said:

I believe my plan is responsible and fair. It focuses the benefit on middle class and working families. It helps both current and future borrowers, and it’ll fix a badly broken system. These actions build on my administration’s effort to make college more affordable in the first place.”

Nonsense. Nothing in that statement is true. There’s certainly no fairness. Just because Molly doesn’t have to pay $10,000 of the student debt she ran up getting her gender studies degree (while living in the Kappa house) doesn’t mean the debt went away. It just means that Fred, the skilled carpenter who never went to college, is stuck paying it. Nothing about that is fair.

The plan focuses on working families? Well, yeah, it does. But not in a good way. Carpenter Fred’s family is working-class.

‘It’ll fix a broken system?’ How? How does transferring the debt burden of one person to the shoulders of another make college more affordable?

So, no, forgiving student debt is neither responsible nor fair.

That leads to question No. 2 – the bigger question.

What happens to personal responsibility? They told me what the payments were going to be and I signed the papers anyway. Now I don’t have to pay? Let me sign some more papers.

Student loans are, no doubt, burdensome. But so are car loans and we all need a car. So why not forgive a chunk of everyone’s car loan?

The pandemic hit small businesses particularly hard. Wouldn’t it be fair to forgive all or part of what Hank, of Hank’s Car Wash & Detail, owes his bank?

What about nurses? Nurses had a particular time of it through COVID. Don’t we owe it to a dedicated nurse to forgive at least some of what she owes on her VISA?

Come to think of it, after what we’ve been through, owing money is generally tough. Why not let everyone designate $10,000 worth of personal debt to be picked up by Uncle Sam?

Maybe so. But when these or similar idiotic policy ideas start coming from the Dems, remember this:

You heard it here first.