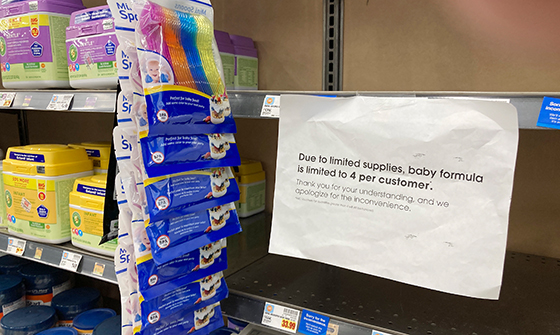 Here’s a fact. Parents of bottle-fed infants are dependent upon infant formula for the survival of their babies. If infant formula isn’t available, sharing half your ham sandwich with your baby isn’t an option.

Yet infant formula in the richest nation in the world is in critically short supply. That’s because the Biden administration’s FDA took the largest producer of baby formula offline without so much as a passing thought as to how the resulting supply gap would be filled.

When the inevitable shortage blossomed into the crisis it was certain to become, only then did the administration start making any noises about dealing with it.

Well, look, the administration acted from day one after the recall, taking steps like creating more flexibility for the WIC program to help rebalance the availability of formula in the states. There are more actions that are underway including looking at imports…”

Thanks to Jimmy Failla, I, too, now own a Politics-to-English dictionary. When a politician says, “from day one,” he means, “we’re really late on this.” And when he says, “looking at,” he means, “taking no concrete action.”

As usual, we can count on the ever-quotable John Kennedy, Republican senator from Louisiana, for the most cogent analysis.

Here’s what the Biden administration ought to do. He ought to call in the top ten people at the FDA. And he ought to say ‘what happened?’, and give them about 20 minutes to explain what happened. And then the president ought to turn to the top ten people at the FDA and say, ‘You have ten days to fix it’. Now I can promise you at least one of those bureaucrats is gonna say, ‘Oh, Mr. President, you don’t understand, it can’t be fixed in ten days. We need a bunch of consultants and experts.’ That’s the one you fire. And then the rest of them will fall into line.”

Which is what would have happened – or something along similar lines – in a Trump White House. (You’ll recall that thanks to Trump’s slashing of FDA red tape, the COVID vaccines that the Biden administration insisted that we all take got developed in about one eighth the time the “experts” said it would take.) Say what you will about Donald Trump and his verbal excesses and occasional boorishness, judging purely on policy and competency, his administration ran circles around that of Joe Biden.

So, picture this if you can. See in your mind’s eye an exhausted 29-year-old, nominally liberal, working mother — a young woman who would otherwise retch at the thought of voting for Donald Trump. Picture her with her new baby in the car driving from store to store desperately looking for formula.

Who do you think she’d rather have as president in that fraught moment – a president that “helps rebalance” things in the states and, “looks at” imports? Or a president that spearheaded the development of three new vaccines in less time than a full-term pregnancy?