Two things to consider arising from the Uvalde horror. 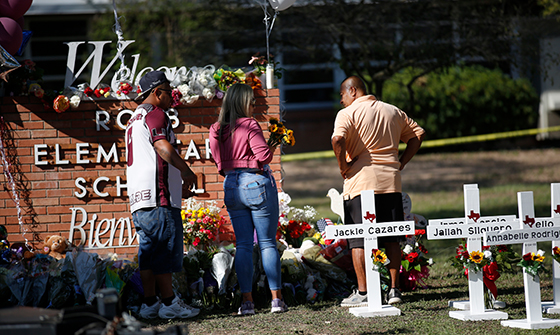 People pay their respect at a memorial set up outside of the Robb Elementary School in Uvalde, Texas Thursday, May 26, 2022. (AP Photo/Dario Lopez-Mills)

Two things come to mind in the wake of Tuesday’s horror in Uvalde. First, beware of “solutions” if the definition of that word is; something that will keep a tragedy like this from ever happening again.

Under that definition, nobody has a solution – most particularly bloviating politicians. So, make a pact with yourself to ignore rhetoric like this from Senate Majority Leader Chuck Schumer.

Imagine if this were your kid or your grandkid. How would you feel? Could you ever forgive yourself for not supporting a simple law that would make these mass shootings less likely?”

There is no “simple law” that will make mass shootings less likely. If such a piece of legislation could be written, it would have been enacted long before now.

If you’re looking for simple, consider this simple fact. There are no guarantees of safety. The very best we can hope to do is improve the odds.

One way to do that already exists in Texas. It’s called the Guardian Program. It came following the 2009 mass shooting at Ft. Hood. The Guardian Program allows school faculty who volunteer, who have been screened and who undergo Texas Department of Public Safety-approved training, to carry weapons for defensive purposes on campus.

No, the program isn’t a panacea. But it has the potential to reduce the response time to an active shooter situation – a key consideration because most mass shootings last less than five minutes. It also offers the advantage of inside knowledge. A teacher or coach or a principal who volunteers to be a first line of defense knows the students, has an eye for the students who might be trouble and knows the layout of the school building. A cop rolling up on the scene knows none of these things.

To the extent that schools have looked at the Guardian Program and rejected it, it might now be worth taking a second look.

That leads to the second thing that comes to my mind.

School districts in Texas are called “independent” – the “I” in ISD. They are not subordinate to any city, county or state government. The responsibility for what happens in Texas schools lies with the parents of school-aged kids together with the property owners who pay property taxes in those districts.

Texas has no state income tax. The largest assessed tax in Texas is property tax. Between 65 and 70 percent of property tax receipts go to local school districts. Consequently, local school boards in Texas are arguably the most powerful elected bodies for the simple reason that they control most of the tax money.

Yet, school board elections are notorious for low voter turnout and school board meetings are generally only attended by activists with narrow agendas.

Beyond your concern for your child’s safety, you should be concerned that he or she isn’t learning anything — or worse, is learning things you don’t want him or her to learn.

Is your child’s teacher affirming the values you teach or undermining them? Do you know?

What’s in your kid’s history book? Does your high school student still read Shakespeare? Nathaniel Hawthorne? Mark Twain? If not, what are they reading instead? Do you know?

Even if you don’t have kids in school, it doesn’t mean you don’t have a vital stake in what is taught in those schools. What’s happening on that campus down the street or around the corner from where you live? Do you know?

No developed nation in the world pays more for education and gets less. Whose fault is that?

President Biden was right about one thing Tuesday night. The United States is the only nation in the world that suffers routine school shootings. But you can be certain that he’s not going to fix the problem and neither is anyone else in Washington.

The schools in this state are, by design, hyper-local. It’s on us. What are you doing on a local level? If all you’re doing is waiting for the federal government to shovel more money at your school while trussing it up in more rules and red tape, don’t be surprised when your kid can’t read while his school is the one getting 24-hour coverage on the cable channels.