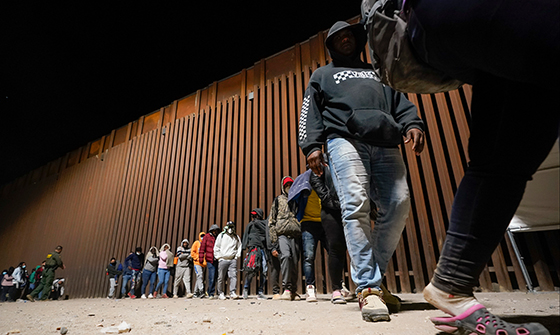 A group of migrants, mostly from Cuba, line up to board a bus after crossing the border from Mexico and surrendering to authorities to apply for asylum on Thursday, Nov. 3, 2022, near Yuma, Arizona. (AP Photo/Gregory Bull)

We have need of some clarity with respect to the humanitarian disaster playing out day-by-day on our southern border. As is typical of the times, most of the media reporting on this subject is incompetent and lazy.

I’m sure you have heard TV pundits talking about the “repeal” of Title 42 set for next week.

Title 42 isn’t about to be “repealed.” Here’s what’s really going on.

The Code of Laws of the United States of America, usually simply called the “United States Code” or “USC,” is the official compilation of the federal statutes enacted by the Congress dating back to the First United States Congress in 1789.

The United States Code is divided into 54 areas called “titles.” Each title deals with a specific area of government. For example, Title 18 concerns itself with crimes and criminal procedure.

USC Title 42 contains the statutes having to do with “The Public Health and Welfare.” Chapter 6a of Title 42 contains the statutes dealing with public health emergencies. It is under authority granted in Title 42, Chapter 6a that the Trump administration issued an executive order that requires immigrants seeking asylum in the United States to wait somewhere outside the United States for their asylum petitions to be considered.

The stated purpose of that executive order was to reduce the flow of immigrants during the COVID-19 pandemic. The real purpose was to stem the flood of illegal immigration using an argument that Democrats couldn’t easily slap down.

That order expires Tuesday. Nearly everyone – including some Democrats – expects the flood to become a tsunami.

In other words, you think it’s bad now? Just wait.

The stupidity of what is happening with respect to illegal immigration is beyond comprehension. Thousands and thousands of immigrants willingly turn themselves in to U.S. Customs & Border Protection every week saying that they are seeking asylum. They know what happens next. They are processed and given a date, years in the future, at which they are nominally to appear to have their case for asylum heard by an immigration court. They are then released into the country pending that court date.

Where they go no one in the federal government can tell you. Almost none of them appear on their appointed dates. Almost none of them qualify for asylum under our laws in the first place. Everyone in government, right up to President Biden himself, knows this. An immigrant’s encounter with, and processing by, the Customs & Border Protection Agency amounts to de facto permission by the U.S. government for permanent residency in the United States. The numbers swell every month, further burdening cities and states with the costs of social services, welfare, schooling, housing, health care and crime.

No other nation on the planet is this stupid. That’s true and bad enough.

But it’s even worse when you think about it and realize that just two years ago, under the previous administration, our nation wasn’t this stupid either.