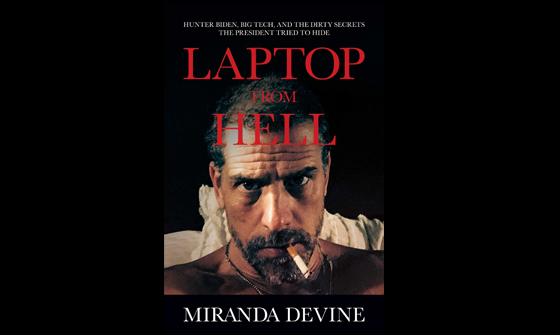 If you’re struggling for Christmas gift ideas, I can offer some help. It’s a recycled recommendation from this time last year but, given recent events, it remains relevant.

For those hard-to-buy-for people on your list, give a copy of New York Post columnist Miranda Devine’s excellent book, “Laptop from Hell.” Taken from the world class reporting that Ms. Devine did on the subject, the book details the rank corruption of the Biden family beginning with slacker, sex-addicted, drug-addled ne’er do well First Son, Hunter, and culminating with the “Big Guy” himself, the 46th President of the United States.

If you’re just returning from an extended trip to another solar system, the title “Laptop from Hell” refers to the MacBook laptop computer that Hunter Biden dropped at a Delaware computer repair shop and then never reclaimed. The shop owner took legal possession of the laptop and its contents by virtue of it being considered abandoned under the laws applicable to repair facilities.

The shop owner looked at what was stored on the computer and was aghast. So aghast that he turned it over to the FBI in 2019. (The FBI sat on it.)

Aside from photos of naked Hunter Biden having sex with prostitutes and taking illegal drugs, the laptop contained hundreds of emails and other documents that make it clear that Hunter was peddling access to his father’s office – at the time Vice President of the United States. The purchasers of that access included oligarchs and bad actors linked to China, Russia and Iran.

First, it’s clear that Joe Biden himself was in on it. Big time. The now President of the United States personally profited to the tune of millions of dollars from the biggest influence peddling scheme in U.S. history. No reasonable observer can come to any other conclusion than Joe Biden has been the beneficiary of cash payments funneled through his son that came from our country’s most formidable adversaries.

One cannot thus help asking, to what degree is the president now compromised by the Chinese Communist Party, Vladimir Putin and other malign actors?

Second, and arguably even worse, it’s clear from the Twitter dump that the FBI, the Department of Justice, the “intelligence community,” Big Tech, the Democratic Party, the Biden campaign and the legacy media all conspired to suppress the biggest political scandal story in American history – and in so doing, interfered in the 2020 election. (Those of us old enough to remember once thought that Watergate was a big deal.)

Most troubling is the involvement of the DoJ and the FBI. Agencies of the government – arguably the two most fearsome to ordinary Americans behind the IRS – acted to suppress the 1st Amendment to the Constitution by proxy.

James Madison is spinning in his grave.

So, shop now. Everyone on your list has a stake in reading Laptop from Hell.