Pray for the church of Peter. 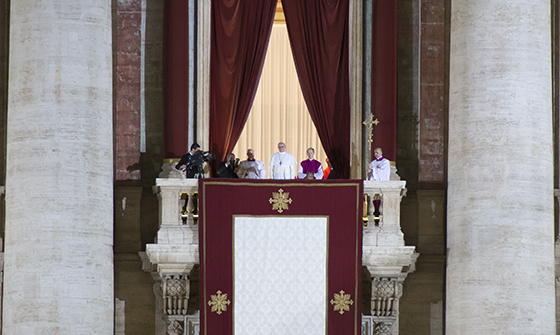 Pope Francis being introduced to the crowd gathered on St. Peter’s Square on the evening of Mar. 13, 2013, shortly after having been selected in conclave by Catholic cardinal electors. (Photo © 2013 Paul L. Gleiser)

Early in the morning of March 14, 2013, sitting in ABC’s bureau office just off St. Peter’s Square in Rome, and having just personally witnessed the introduction of Pope Francis to the world, I wrote the following:

I’m not Catholic. I’m a Methodist.

Still, I find myself rooting for the Catholic Church. Everyone who professes a Christian faith is descended from the church in Rome. For all of the faults of the Roman Church, and they are numerous, at its core the Catholic Church has been an institution dedicated to elevating humans that they might become more worthy of their belief in having been created in God’s own image. The Christian faith in general, and the Catholic Church in particular, has, among other things, chastened its believers. The authority of the church mitigated the baser instincts of man. The teachings of the church have sought to summon our better angels.

As the church has forfeited moral  authority due to ineptitude and self-inflicted wounds such as the clergy abuse scandals, nothing really good has rushed in to fill the resulting vacuum.

I also believe that to the extent that the Roman Church suffers a loss of respect, that loss of respect negatively impacts all Christian congregations. For most of the world, Catholicism is Christianity.

Thus, I wish Pope Francis well. I’d like to see the Catholic Church get some of its mojo back.”

That was nearly five and a half years ago and it saddens me to say that my wish remains unfulfilled.

A 900-page Pennsylvania grand jury report released last week alleges decades of sexual abuse by Catholic clergy in Pennsylvania involving more than 300 priests and more than 1,000 victims. Most damaging is the allegation that high ranking church officials knew of the abuse and covered it up.

To be absolutely fair, it is important to point out that the vast majority of the allegations concern incidents that occurred many years ago.

But on the heels of that report comes an August 11 letter written by Archbishop Carlo Maria Viganó which alleges culpability going all the way to Pope Francis. According to Viganó, Pope Francis removed restrictions placed on former Cardinal Theodore McCarrick by his predecessor Pope Benedict XVI even though Pope Francis knew from as early as three months into his papacy that McCarrick was a serial sexual predator.

Pope Francis pointedly refused to comment on Viganó’s letter when questioned about it by reporters.

It is important to the Catholic Church, to every practicing Christian and indeed to the entirety of the world that this all come to an end. Pope Francis must be the prelate that once and for all does whatever is necessary to root out sexual predators in the ranks of the Catholic clergy.

For the sake of the Christian faith and for the sake of basic decency, the pope must be willing to suffer any consequence to the church or to himself, and to pay any price, in order to assure the world that the horror of pederasty in the Catholic Church has come to an end. The church must examine every aspect of its clergy and must be willing to do whatever is necessary to bring about an end to the conditions that have given rise to such horrifying behavior on so large a scale. To do less threatens the church’s very viability.

I want to believe, every time I see a Catholic priest, that the man at whom I am looking is, to the best of his ability, trying day-by-day to be Christ’s emissary on Earth. It is supremely unfair to the men who sacrifice so greatly to serve in that role that so much has been allowed to happen as to bring that belief into question.

The church must, once and for all, get this right. More than most people realize, the Catholic Church stands worldwide watch on the walls of civility and societal order. As I said in March 2013, the Catholic Church in particular has served mankind over the millennia by, among many other things, chastening its believers. And as I also said, as the church has forfeited moral authority, little that is good has taken its place.

I pray for you, Holy Father. And I pray for the church.