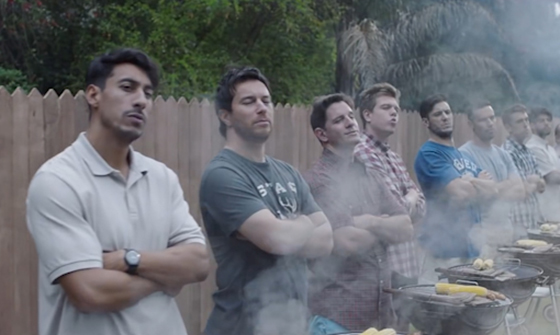 Frame capture from the Gillette-sponsored short film “We Believe.”

Men, I have some disturbing news. It seems that we – and apparently not just some of us but all of us – are toxic.

We learn this first via a September 2018 report from the American Psychological Association titled, “Harmful masculinity and violence.” The first paragraph of the report begins beneath a subhead that reads, “Early socialization of negative masculine ideals.” The opening text then reads,

Oh my God, our boys are being taught to be tough, stoic, heterosexual and self-sufficient! What next, competitive and gentlemanly?

Next, we hear from an iconic American consumer brand. Gillette, in a sanctimonious video ad, called to our attention the toxicity of boys wrestling harmlessly in the back yard and men cooking on an outdoor grill. The implication is clear. The message isn’t that some men who grill outdoors also behave in unacceptable ways. No, toxicity lurks in any man who grills outdoors.

Let’s stop and think about what would happen if a national brand advertiser was as broadly stereotypical in its portrayal of women. Suppose a carmaker showed a woman behind the wheel being a “woman driver.” Or imagine a drug maker showing a woman berating her husband in an overwrought emotional tizzy. Can you imagine the backlash?

This long-brewing attitude toward boys and men ignores biology, 5,000 years of recorded history and about 250 years of American history.

Throughout the animal kingdom, males protect females lest females fall disproportionately to predation and the species die. Only among leftist humans is that decried as patriarchal.

From the time of the caveman right up to now, the job of taming nature for purposes of comfort and safety has fallen almost exclusively to men. Into the 99thpercentile it is men who are the linemen and the roustabouts and the stevedores and the drywallers and the plumbers and the HVAC technicians and the carpenters and the loggers and yes, the police and the firefighters. The same for defending the peace. The pointy end of the spear is still almost entirely male.

Yes, there are bad men afoot in America. But it is yet undeniably true that since the 18thcentury, that unique breed called the American Man has freed more people from bondage and lifted more people out of poverty and fought more fiercely for justice than any other cohort in history.

You smug lefties and angry feminists sniff at the American Man if you want. But you’ll miss him when he’s gone.