Memo to Dems: The voters are speaking. 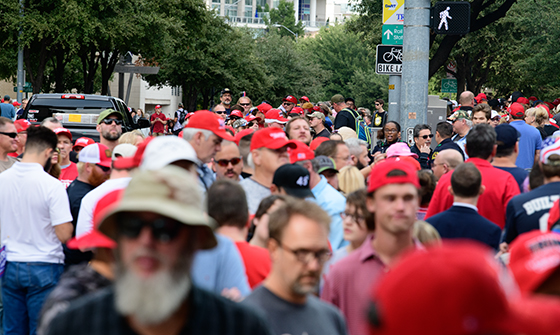 Thousands stand in lines that stretch for blocks from the American Airlines Center in Dallas hoping for a seat inside for a campaign rally by President Donald Trump. (Photo by Paul L. Gleiser)

As I write this Thursday afternoon thousands of people are lining up outside the American Airlines Center in Dallas for a rally by President Trump. Not everyone in line will get a seat. Those lining up are grateful that the summer heat that wore out its welcome well into October has at last broken.

Not that an unseasonably hot afternoon would likely deter them. Since the middle of 2015, Trump supporters have stood for hours outside arenas across the country in all kinds of weather just to have the opportunity to see Trump being Trump live and in person.

To the unending consternation of Democrats and their water carriers in the media, Donald Trump is popular with a huge proportion of people in the heartland. Political pundits and jabbering cable TV know-it-alls have been saying that Texas is on the feather edge of becoming a blue state. We’ll see. But it sure doesn’t look that way Thursday afternoon in Dallas.

Never will the Dems admit that Donald Trump struck a chord in the heartland by pointing out that trade policies under four previous administrations had had the perverse effect of importing permanent, structural unemployment into the United States. They don’t want to hear that Trump resonated with middle-of-the-country voters when he promised to stop the influx of about a hundred or so thousand illiterate peasants coming across our southern border every month.

Most voters don’t want to pay higher prices for gasoline in order to “save the planet.” Nor do they want to constantly have to kiss the rings of autocratic Middle Eastern mullahs in order to be able to fill up at the gas station. All presidents prior to Trump had occupied some spot on the energy policy continuum between mouthing platitudes about “energy independence” on the one hand and outright hostility toward the oil & gas industry on the other.

Along comes Donald Trump and reams of stultifying energy regulations get consigned to the shredder and the next thing you know, America is a net energy exporter.

All of these things and more the voters in the American heartland liked in prospect and now like even more in reality. Thus the long lines Thursday in Dallas.

All of which puts Democrats in the uncomfortable position of trying to overturn the stated will of those very voters via endless investigations and ostentatious attempts at impeachment.

It’s a losing strategy for Democrats. If the Dems want to govern, they need to win outright at the ballot box. Judging from the past three years, it appears that they don’t much like their chances.