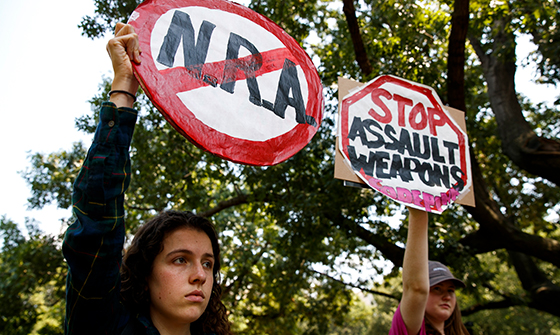 I’m not a gun guy. Not that I’m anti-gun. I’m not. I am a full-throated advocate for the second amendment. I shudder to think of law-abiding citizens stuck between gun-wielding law-breakers on one side and an armed, tyrannical government on the other.

However, I know enough about guns to know that confiscating weapons like the AR-15 and its cousin the AK-47 will have exactly the same impact on reducing mass shootings that banning plastic straws will have on environmental pollution.

Like plastic straws, the AR-15 has become a hobbyhorse of the Left. That’s because the AR-15 has a distinctive design. It is one badass-looking weapon. It gives liberal women and lifelong urban-dwelling, metrosexual men the vapors. Because of its distinctive visual design, those who know nothing about firearms look at it and think that it’s somehow orders of magnitude more powerful than more prosaic-looking rifles.

Demonization of inanimate objects, such as SUVs, drinking straws, plastic shopping bags – and guns – is a time-honored tactic of liberals. It allows them to avoid actually addressing problems and debating policy on the basis of empirical data and provable facts.

There are any number of readily available rifles that are much more powerful than an AR-15. But you don’t hear politicians calling for their confiscation. It is true that an AR-15’s killing power derives in part from the fact that it will fire 30 rounds as quickly as one can pull the trigger 30 times. But many, many handguns can fire 16 to 18 rounds or more just as quickly. And unlike an AR-15, a 9mm handgun, together with multiple ammunition clips for fast reloading, can be easily concealed in everyday clothing.

Yet every time some deranged psychopath goes off his nut and starts shooting (no matter what weapon he shoots), the cry goes up to ban “assault rifles.” In an election year, the cry is more shrill. Listen to Texas’s own man-child former congressman Beto O’Rourke from the most recent Democratic debate.

Hell yes, we’re going to take your AR-15, your AK-47. We’re not going to allow it to be used against our fellow Americans any more.”

Horrible mass shootings happen today for a complex set of reasons over which no posturing, arm-waving politician like Beto O’Rourke will have any impact – other than to support liberal policies that have resulted in the erosion of church and family and the guardrails of the social order – with the resulting pathology from which mass shootings often arise.