For Dems the hour grows late. 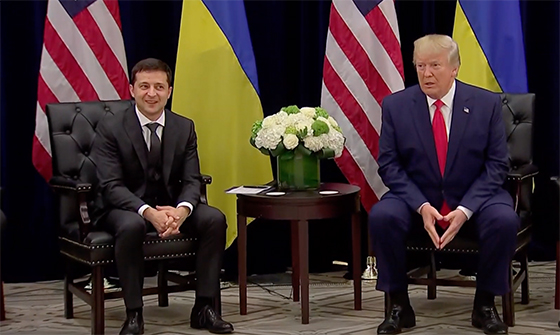 President Donald Trump and Ukraine’s President Volodymyr Zelensky speak to the media after their bilateral meeting in New York City.

Last month a Harvard/Harris poll of over 2,300 registered voters sought to gauge public opinion in a somewhat different way. It attempted to measure support for Donald Trump and a Democratic opponent without mentioning names.

Which candidate are you more likely to vote for:

A presidential candidate who stands for the green new deal on climate change, Medicare for all, free college tuition, opening our borders to many more immigrants and raising taxes to pay for these programs.

A presidential candidate who stands for lower taxes and reduced government regulations, strengthening our military, strengthening our border to reduce illegal immigrants, standing up more to China and Iran and seeking better trade deals for the US?

So, absent names, what do voters prefer?

By a whopping 61 percent, they prefer the Trump agenda. Among independents – often considered to be decisive in presidential elections – it’s two out of three. Even a third of Democrats in this poll prefer Trump policy. The lesson: hating Trump is the only thing Democrats have.

Dems cannot win on policy. So they dare not tell the truth. They dare not offer any specifics as to how universal health care and free college for everyone will be paid for. To the extent that they understand that “raising taxes on the rich” will fall grossly short, they cannot say so.

They will never explain – to the extent that they have the requisite understanding – the economic devastation attendant to ending the use of fossil fuels.

At some level Democrats know that when properly understood by the electorate, their programs are dead at the ballot box. They also understand that an incumbent president presiding over a robust, full-employment economy will be hard to beat. Thus, the desperate quest for other measures.

So far, those measures have fallen short. The Mueller Report on Russian “collusion” – sure in the minds of Democrats to lead to Trump’s removal from office – was a dud. Every breathless “bombshell” revelation in the media about this or that Trump utterance has fizzled.

All of which leads Democrats and their media handmaidens to a whistle-blower’s (read: “leaker’s”) account of a political quid pro quo attempt during a phone call between President Trump and the newly elected president of Ukraine. Before even knowing what was actually said on the call (of which the “whistleblower” has no firsthand knowledge), House Speaker Nancy Pelosi gave in to the far-left wing of her caucus and opened an impeachment inquiry.

The subsequent release of the summary transcript of that phone call – and the Ukranian president’s unequivocal statement that he felt no quid pro quo pressure from President Trump – renders flimsy any evidence of high crimes and misdemeanors.

Flimsy or not, the Dems are going with it. Because the hour grows late. And it’s all they have.