What is this man hiding? 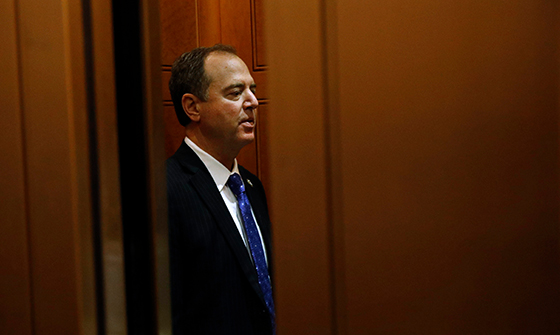 House Minority Whip Steve Scalise, Republican from Louisiana, has asked a great question. What is House Intelligence Committee chairman Adam Schiff trying to hide? Why, if Mr. Schiff truly believes that President Trump has committed high crimes and misdemeanors necessitating his impeachment and removal from office, are star chamber-like hearings being held behind closed doors in the basement of the Capitol?

Overturning a duly constituted presidential election is a very serious matter. It is the very epitome of the people’s business and should thus be carried out in full sunlight in the people’s House. Too much in Washington now happens behind closed doors as it is. The process of collecting evidence to impeach a president is a time when the doors and windows should be flung wide.

The impeachment of a president being the people’s business carried out in the people’s House, all of the people’s representatives should be included. Yet Republicans not on one of the three investigating committees are specifically excluded.

If witnesses are providing “damning” evidence against the president, as Schiff constantly says they are via highly selective leaks to the media, the American people should be able to hear that evidence. Impeachment, after all, isn’t a criminal proceeding. It’s political. It’s an action taken on behalf of the electorate. That electorate – read: us – should enjoy full transparency.

Of course, we know why Schiff is operating this way. In the absence of fully open hearings, Schiff is free to selectively leak material of his own choosing on his own time. Schiff can leak reports to the media that include adjectives like “devastating” and “damning,” secure in the knowledge that the media will uncritically run with them. For their part, Republicans, being in the minority, are bound by House rules to avoid making statements to the media lest they be brought up on ethics charges. (Democrats are similarly bound but, being in the majority, control the enforcement mechanisms.)

So, back to the question. What is Schiff hiding? Could it be that when it comes to actual, actionable evidence he’s got bupkis? Is this entire star chamber gambit simply the playing of a prolonged procedural game intended solely to hang a cloud over the president to weaken him politically?

It all stinks to the very rafters. But the Dems press on amid only token pushback from Republican leadership. It’s a risky gambit given the blow to Dem credibility arising from the Mueller investigation debacle. And it reeks of desperation.

But given the weak field of Democrat wannabes, it’s apparently all they’ve got.

Ah, there’s the answer! That’s what Schiff is trying to hide.