NYC’s Back to the Future 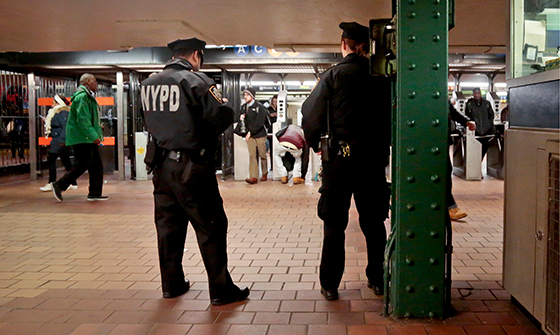 Last Friday, (Nov. 1, 2019) a demonstration numbering about a thousand people broke out to protest alleged police brutality in the New York subway system. It was in response to recent arrests on subway platforms.

The protest had all the trappings we have come to expect in a 21st century protest – including such poetic gems as, “No justice, no peace/F**k these racist police;” and this little ditty, “Punch a cop in the face/Every nation, every race.”

At issue is a state-led crackdown on fare jumping. Fare jumping is the term used to describe the actions of certain subway riders (mostly young males) who hop over the turnstiles on New York City subway platforms and ride the subway for free.

The kerfuffle has exposed the fact that the mayor of New York City, Bill de Blasio; and the governor of New York, Andrew Cuomo; are at odds. New York City and New York state finances are intertwined in ways that are hard to explain. But suffice that state funds are used in the operation of the New York City Metropolitan Transit Authority and the governor – in a sudden fit of fiscal rectitude – is tired of underwriting free use of the subway system. (Yes, Cuomo is a liberal, but apparently not liberal enough.)

Not so the New York City mayor and New York City prosecutors. They recently announced that they would no longer prosecute “theft of services” crimes – such as jumping the subway turnstile. Predictably, fare jumping has skyrocketed. Why pay if there’s no penalty for not paying?

Today’s galaxy of liberal stars is all in for fare jumping. According to the liberal whose star shines brightest – New York Rep. Alexandria Ocasio-Cortez – fare collection (read: enforcing the law) constitutes the “criminalization of poverty.”

Welcome (back) to the dystopia of New York City in the 1980s. Those of us who traveled to New York back then remember the open-air drug market in Bryant Park behind the New York Public Library, the degenerate crime, rat and pornography-infested hellhole called Times Square, the world’s largest homeless shelter called Grand Central Terminal and the graffiti and the muggings and the murders and the general mayhem.

After 40 years of being led by Democrats, New York came within a whisker of becoming a failed city along the lines of Detroit – but on a much bigger scale. A government that cannot (or will not) control small crime clearly signals an inability (or unwillingness) to handle more serious problems. The ensuing societal chain reaction leads to chaos – such as that which engulfed New York City.

But along came Republican Mayor Rudy Giuliani in 1993. Despite intense opposition, he got it. His reforms helped turn New York into the safest big city in the world. His successor, Michael Bloomberg, stayed the course.

But, under the mayoralty of über-lefty Bill de Blasio, the libs are back in charge with predictable results – along with a glimpse of our nation’s future under any of the current crop of Democratic presidential hopefuls.