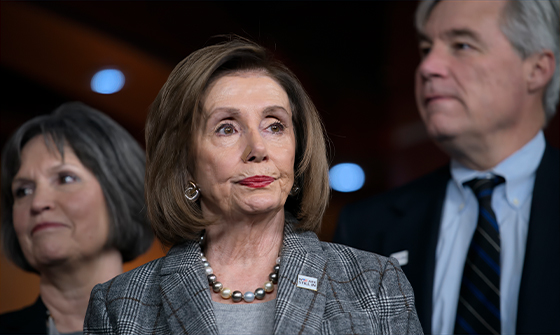 House Speaker Nancy Pelosi has thrown in the towel on impeachment, even if she won’t come out and actually say it. Her invitation this week to President Trump to come to the House chamber to deliver the State of the Union address on February 4 is tacit admission that impeachment is over.

Pelosi, with whom I vigorously disagree but whose political acumen I have long recognized and respected, is caught between political reality and the squawking, yowling day-care center inside her own caucus. “The Squad,” four far-left freshman congresswomen led by former New York barmaid Alexandria Ocasio-Cortez – aka “AOC” – has effectively nullified Nancy Pelosi’s control over the House.

Rep. Cortez and the Squad have managed to pull the Democratic Party into very left-most precincts of Crazyville (though in the cases of people like Adam Schiff and Jerry Nadler, they didn’t have to pull very hard).

Ms. Pelosi has long known that impeachment was and is a bad idea. She is on record fairly recently saying so. She knows that impeachment has landed with a thud. But she dare not admit it lest she be set upon by her far left Democrat base, the media and AOC’s 6.1 million lunatic Twitter followers.

So, Ms. Pelosi is sitting on the articles of impeachment that passed under her gavel and is refusing to send them to the Senate, in the apparent hope that a national amnesia epidemic sets in and the whole thing just goes away. Donald Trump is president, will remain so for the rest of his term and will likely win re-election.

And Nancy Pelosi knows it.

In our constitutional government, impeachment is nitroglycerin. If not handled with extreme caution, it will blow up in the faces of those attempting to use it. (Just ask Newt Gingrich.)

Such is the case with the impeachment of Donald Trump. Not only did impeachment fail to unseat the president – something that a political pro like Nancy Pelosi knew all along would never happen – it didn’t even damage the president politically. There are any number of polls that say that being impeached along strictly partisan lines actually made Trump stronger.

So here the Democrats sit, less than 10 months out from the 2020 election, with exactly no ammunition left (save for maybe appointing Rep. Al Green of Texas as chairman of the Permanent Committee on Impeachment). The Dems have thrown everything they could get their hands on at Donald Trump and every last bit of it has bounced off.

The Mueller investigation was a bust. Countless House committee investigations have gone nowhere. In fact, Donald Trump likely holds the distinction of being the most investigated U.S. president in history – all to exactly zero good effect for Democrats.

Against a backdrop of the best economy that most living Americans have ever seen and with nothing left to throw at him, Democrats can do nothing now but watch Trump tee up a second term that will likely be even more successful than the first.