The media’s shameful dereliction in Portland. 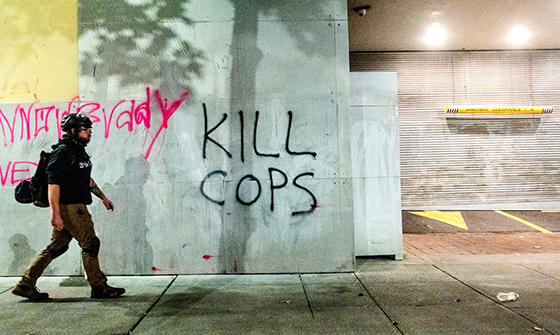 Victor Joecks, an opinion writer for the Las Vegas Review-Journal, floated a penetrating proposition in the Tuesday edition of that paper. He said,

If the media covered pandemics like they do the Portland riots, the coronavirus wouldn’t be dominating the headlines.”

He couldn’t be more correct. The media is doing all it can to play down destructive rioting in deep-blue Portland, Oregon that has been going on every single night for the past two months. The same is true as it pertains to the reporting on the chaos plaguing other big, Democrat-dominated cities – cities that include New York, Chicago, St. Louis and Baltimore.

For two months rioters, hooligans, anarchists and common thugs have been turning the once beautiful city of Portland into a dystopic hellscape. Businesses are being destroyed. Police officers are being injured – some severely. Three officers may have been permanently blinded.

At the center of it all lies the Mark Hatfield Federal Courthouse. Rioters are using hurled explosives and Molotov cocktails in an attempt to enter and sack the building. Because the Portland police are prohibited by city leadership from protecting the courthouse, the president has dispatched Federal Protective Service officers.

Ted Wheeler, the mayor of Portland, is doing nothing to quell the mayhem. Quite the opposite, actually. He stood at the temporary fence that surrounds the federal courthouse and announced through a bullhorn that he stands in solidarity with the rabble in protest of President Trump’s “occupation” of the city. (The rabble for their part didn’t seem impressed. They taunted and booed the mayor until he was forced to slink away.)

Here we have 60-plus nights of rioting. That is a huge story. And yet the media is doing all it can to play it down. Nearly every report is at pains to say that the riots are in connection with “mostly peaceful protests.” There was a day when any self-respecting news editor would have said that when Molotov cocktails are being thrown and police officers are being blinded, whatever “peaceful protest” might be underway constitutes a sidebar.

Mr. Joecks points out in his Tuesday column that if the coronavirus were being covered in the same way as the Portland mayhem, the story would read, “COVID-19 is asymptomatic for most people though occasionally it becomes a life-threatening disease.”

This is all very easy to understand. Democrat-run cities are burning. That makes Democrats look bad. The media doesn’t want Democrats to look bad. They tailor their reporting to fit that objective.

As we said last week, we should tailor our consumption of that media accordingly.