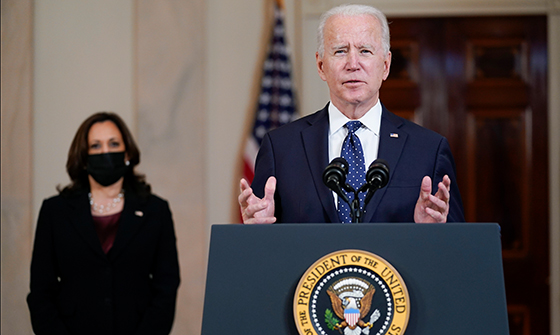 Former Minneapolis police officer Derek Chauvin was convicted Tuesday. Legal scholars can argue as to whether he was over-charged and as to whether it was possible for him to ever receive a fair trial. Be that as it may, the evidence strongly suggests that some measure of justice was obtained.

But President Biden’s remarks following the verdict were an absolute disgrace – an insult to people of goodwill regardless of race or skin color. Here is how he led off.

Systemic racism is a stain on our nation’s soul…a knee on the neck of justice for black Americans.”

That is a shockingly irresponsible statement made all the more so because it comes from the President of the United States. Wasn’t it just 90 days ago that the media talking heads were waxing rhapsodic over Biden’s call for ‘unity’ in his inaugural address?

The term ‘systemic racism’ is pure sophistry – nothing less than a blanket indictment of every white American. It’s a term specifically intended to put good people on the defensive. And it is a term that is grossly misapplied as it is used to describe the United States of 2021. Use of the term blatantly and intentionally ignores the progress that America has made on race since the 1960s.

A systemically racist country whose population is only 13 percent black doesn’t twice elect a black man as president. Full stop.

A lie that is allowed to stand by the silence of those who hear it is the most insidious lie of all. It is past time to call out the lie that America is systemically racist.

In his remarks following the Derek Chauvin verdict, President Biden went on to say:

The murder of George Floyd launched a summer of protests we hadn’t seen since the civil rights era in the ‘60s…protests that unified people of every race and generation in peace and with purpose.”

Innocent people were killed. Businesses – many black owned – were burned to the ground. Billions of dollars were lost. Livelihoods were destroyed. Hopes for better tomorrows were dashed.

Riots don’t happen in peace, Mr. President. Your studied silence on those riots during the 2020 campaign and continuing through Tuesday afternoon has been deafening.

In the end, Derek Chauvin got what he deserved from a jury Tuesday.

That’s more than we got from the President of the United States.