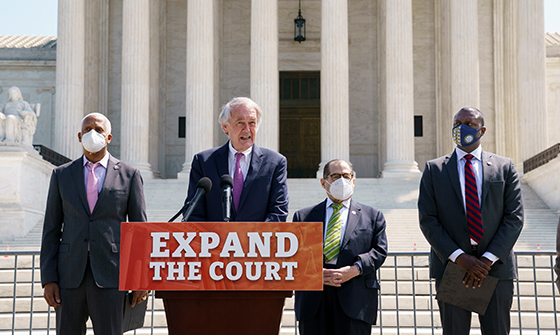 Last Friday, President Biden signed an executive order creating the Presidential Commission on the Supreme Court of the United States. The ostensible purpose of the ostensibly bipartisan commission is to consider and review, “principal arguments in the contemporary public debate for and against Supreme Court reform…”

That is, of course, hogwash. The commission’s purpose isn’t to review anything nor is it anywhere close to bipartisan. The actual purpose of this new commission is to provide cover. The goal is to create a micron-thin patina of legitimacy to cover the Democrats’ odious desire to increase the number of justices on the high court from nine to 13.

Minus all of the high falutin’ language contained in Biden’s order, it’s called packing the court. FDR tried it in 1937 and it blew up in his face. As recently as the 2020 presidential primaries, Joe Biden was against it.

But that was then. Today, with Biden deeply in thrall to the far-left base of his ever leftward-lurching party, he is obligated to do pretty much whatever he’s told. Consequently, on Friday he created a showpiece Supreme Court commission.

But that was a week ago. Today, congressional Democrats stood on the steps of the Supreme Court and announced that they don’t need no stinking commission. No need to consider, “principal arguments in the contemporary public debate.” (That’s messy.) No need to wait six months for a report. No need to read such a report and see what it says (as if what it will or would eventually say would be a surprise to anyone).

No, no need for any of that. Just cut to the chase and pack the court now.

Democrats are, of course, still seething over President Trump getting three nominally conservative justices confirmed to the high court in just a single term. They unloaded everything they had on Brett Kavanaugh and yet there he sits on the court. They tried to kill off Amy Coney Barrett’s nomination on the grounds that Trump was a lame duck president and had no right to put up a nominee. No such limitation was to be found in the Constitution and there Justice Barrett sits.

But why jump the gun? Why not wait for the presidential commission to give them cover?

It’s now or never. The Democratic congressional majority is razor thin. The Senate is tied 50-50. They can now afford to lose only two votes in the House. They greatly fear, for good reason, the 2022 midterm elections. The Democrats have a narrow window of opportunity and they know it.

So here we have court packing legislation to go along with HR-1, that would nationalize elections, and the mockingly named “New Way Forward Act,” that would make expelling illegal immigrants – even those with criminal records – all but impossible.

Democrats have no time to mess around. They’re coming with everything they have. And if you’re not frightened by what they’ll try to do to the country in the coming weeks, you’re not paying attention.