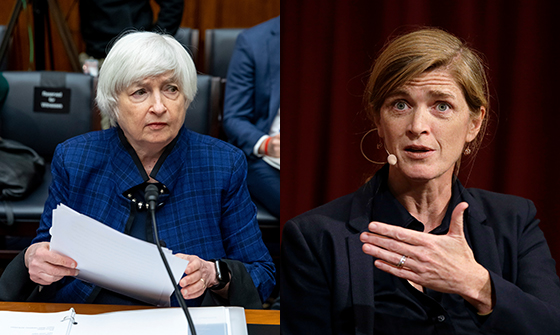 This week the Washington Post published an op-ed by Janet Yellen and Samantha Power – treasury secretary and administrator for the U.S. Agency for International Development, respectively. The headline reads,

To uphold democracy, the U.S. must fight global corruption.”

Your first reaction is, ‘This is a joke, right? That headline cannot possibly be serious.’

And yet, there it is – right under the Washington Post masthead that reads, “Democracy Dies in Darkness.”

The last people on Earth who should be commenting on official corruption are members of this administration. How do they dare even bring the subject up given what we now know about Joe Biden and his wastrel son, Hunter?

We know beyond doubt that Hunter rode around the world on Air Force Two while his old man was VP. Those ridealongs were for the express purpose of collecting pay-for-play cash from corrupt dictators who spend huge percentages of their waking hours thinking up ways to hurt the United States. We know that Joe, himself, personally profited from son Hunter’s rainmaking.

We now know for certain that “Honest Joe” was lying when he said that he never discussed Hunter’s business dealings. We know because he bragged about it. We know that Joe blackmailed Ukraine with a billion dollars of your money to get a Ukrainian prosecutor off Hunter’s trail.

We know that no one who is a serious collector of art thinks that Hunter’s artworks are worth the price of the materials that he used to create them. Such understanding does not require any particular expertise. A functioning pair of eyes will do. Noboby – say again, nobody – would pay a half million dollars for one of Hunter’s pieces if his dad wasn’t the POTUS.

There’s plenty more on the Biden family but if we’re going to talk about rooting out corruption, there are other names on the list.

One of the greatest political money laundering schemes in all of history is the Clinton Foundation. When Hillary was Secretary of State under Obama and then the Democratic nominee to succeed him, money flowed like Niagara into the Clinton Foundation. Scungy, tinpot dictators and corrupt regimes from all over the world poured hundreds of millions of dollars into Bill and Hillary’s “charitable” foundation. Of course, those donations were made because of the good humanitarian work of the Clinton Foundation, right?

C’mon man! It was pure pay for play. How do we know that? Because the Niagara of donations to the Clinton Foundation slowed to a trickle immediately after Hillary lost the 2016 election to Donald Trump.

Don’t hold your breath waiting for the media to jump on any of this. They have repeatedly contorted themselves into pretzels in their zeal to look the other way. (See “Hunter Biden laptop story.”)

The Clintons and the Bidens (and the FBI and the DOJ and the IRS and go down the list) are as corrupt as it gets. If to “uphold democracy the U.S. must fight global corruption,” that fight begins at home.