The Ghost of Decades Past 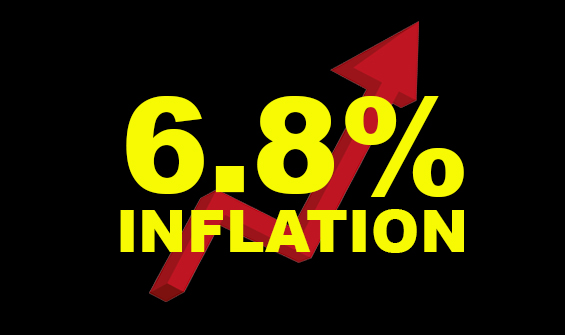 According to just released Labor Department figures, inflation has surged to an annual rate of 6.8 percent. The last time inflation was this high Ronald Reagan was beginning the second year of his presidency.

That’s, of course, bad news for President Biden and the Democrats, as any number of conservative pundits are very happy to point out.

But to hell with the politics for once. The real story is that inflation is bad news for ordinary Americans who live and work in the heartland.

Less than 24 months ago, inflation was largely regarded as a relic of the 1970s. Those of us who were in the work force then remember the astronomical interest rates, crushingly high prices for gasoline (assuming you could find gasoline at all), and restaurant menus with prices scratched through in favor of higher prices written in by hand.

Today’s news reminds us of those bad old days. According to a study released this week by the University of Pennsylvania Wharton School of Business, it now costs the average American family $3,500 more per year in everyday expenses just to maintain last year’s standard of living.

Prices are up pretty much across the board. Gasoline costs 58 percent more than it did this time last year. A new car or truck will cost 31 percent more. Housing is up nearly 24 percent. Food, furniture, hotel rooms, rent cars, TVs and nearly everything else have seen high single digit and double-digit price increases.

Inflation is nothing less than a tax – a tax that is markedly different from the taxes imposed by government in two important ways. First, there are no loopholes or deductions. Everybody who buys anything pays the tax imposed by inflation. And second, unlike our progressive tax code, under which higher earning individuals bear the lion’s share of the tax burden, inflation is a regressive tax. The burden of inflation is borne disproportionately by people with low incomes. The tank of gas that costs 18 to 20 dollars more than it used to is shrugged off by lawyers, doctors, celebrities, well-connected politicians and tenured college professors. But it’s a serious hardship for the hourly wage single mother who works at Wal-Mart.

We’ll stipulate that a good portion of the problem of inflation can be laid at the doorstep of COVID. The disruptions attendant to the pandemic have put many things – from finished goods to the component parts that make them – in short supply.

But with that said, why then Biden policy? Nearly all of Biden’s policy agenda – from shutting down the Keystone XL pipeline to restricting domestic oil and gas production to providing overly generous unemployment benefits to the irresponsibly expensive “Build Back Better” bill – throws fuel on the inflation fire.

Which most hurts “little guys” and the poor and minorities – the very people that Democrats insist that they most care about. If you’re among these, Biden wants you to believe that he and the Democrats are your friends.

Believe me, he and they, are not.