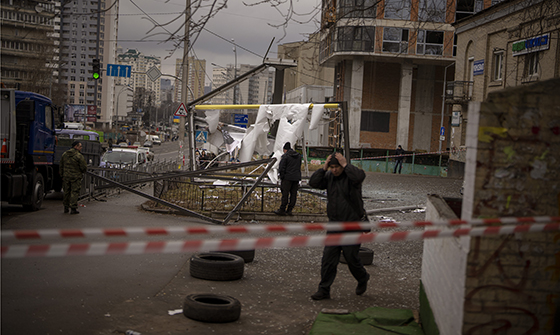 Police officers inspect area after an apparent Russian strike in Kyiv Ukraine, Thursday, Feb. 24, 2022. Russian President Vladimir Putin on Thursday announced a military operation in Ukraine and warned other countries that any attempt to interfere with the Russian action would lead to “consequences you have never seen.” (AP Photo/Emilio Morenatti)

Kiev, Ukraine is a long, long way from here. Leaving from DFW it would take you 35 grueling hours of travel to get there.

So why, exactly, do we care about a conflict between Russia and Ukraine?

Well, to start, Ukraine is the second largest country in Europe behind Russia. It has a population of about 40 million and it occupies an area greater than the State of Texas. It is the number one producer of Uranium in Europe and it produces food that feeds more than 600 million. Ukraine ranks number four worldwide in the total value of its natural resources.

But the Ukraine story is about more than strategic assets.

One day during World War II the world woke up and found that the United States had more men in uniform and more ships at sea than Great Britain. In that moment, world hegemony peacefully passed from one predominantly Christian, law-abiding, English-speaking nation to another. Where once the British Navy patrolled the oceans and projected peacekeeping power around the world, that job now falls to the United States. Or at least it did.

For better – and admittedly at times for worse – the United States has been the world’s hegemon and the chief deterrent force against thugs and tyrants and dictators. There will always be a hegemon, or if not, the contest to become the hegemon.

The idiots on the left who take delight in hating the United States seem to not understand that this nation – with its admitted faults – actually is the bright, shining city on the hill. Through its history, by virtue of its strength, the United States has lifted more people out of poverty and freed more people from bondage than any prior nation in history.

History teaches that weakness is provocative. The United States under President Joe Biden looks weak to a thug like Vladimir Putin. The day that Joe Biden took office a barrel of oil cost $48. Thanks to Biden’s radical left energy policy, that price has doubled – benefitting Vladimir Putin because energy is Putin’s only source of hard currency.

Putin invaded Ukraine because he has the money and he thinks he can get away with it. He no longer respects the western allies because he no longer respects the United States. Joe Biden’s undeniable weakness invites aggression. With Ukraine now hot, don’t be shocked when North Korea starts firing missiles in the direction of San Francisco. Don’t be surprised when the mullahs of Iran start testing a nuclear weapon. And don’t faint when you pay $4.50 or $5.50 or $6.50 for a gallon of gas.

That’s why we care about Ukraine.