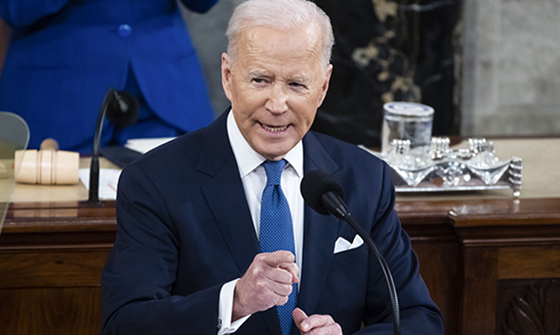 President Joe Biden delivers his first State of the Union address to a joint session of Congress at the Capitol, Tuesday, March 1, 2022, in Washington. (Jim Lo Scalzo/Pool via AP)

I was traveling Tuesday evening, so I watched the State of the Union address while waiting to change planes in St. Louis. It was about what I expected from this bumbling, doddering administration.

Of course, given the events of the preceding week, President Biden led the speech by talking about Russia’s invasion of Ukraine. He said all of the obligatory things about the courage and bravery of the Ukrainian people while condemning the actions of Russian president Vladimir Putin. He then commanded all in the House of Representatives chamber to stand up in a symbolic show of solidarity with Ukraine.

But he said and did all of this against the backdrop of widespread recognition that it was Biden administration policy that did much to set the predicate for Putin to invade Ukraine in the first place. Only an idiot, or someone who is willfully blind, could look at Biden’s catastrophic withdrawal from Afghanistan and say that it didn’t embolden a thug like Vladimir Putin. Putin took the measure of Biden in that episode and found Biden wanting.

One need only have a rudimentary understanding of the Russian economy to understand that energy is Russia’s only source of hard currency. It was the late Sen. John McCain who quipped, “Russia is a gas station masquerading as a country.” Representative Denny Heck of Washington state called Russia, “…a gas station with nukes.”

When Joe Biden, in his first executive acts as president, knee-capped the U.S. oil & gas industry, it served to reduce American oil output by about two million barrels a day. That ended America’s hard-won standing as the swing producer in the world energy market. Oil & gas prices have since more than doubled, serving to fatter the coffers of Vladimir Putin. The U.S. has gone from relative energy independence to buying oil on the world market, $70 million of which every day goes to Russia.

In addition to helping finance Putin’s adventure in Ukraine, those high oil prices are providing much of the impetus for inflation – the worst we’ve seen in a generation. Depending on whose figures you use, it is estimated that the average family is spending between $4,000 and $6,000 more this year than last just to buy the necessities of life.

Joe Biden took responsibility for none of it Tuesday and gave no sign that in light of current exigencies, he might pivot on energy policy. Instead, after his obligatory remarks on Ukraine, he mouthed platitudes and rehashed his big-spending legislative proposals that everybody knows have no chance of passing.

Taken all around, Biden’s State of the Union address was tone deaf and uninspiring, the gushing reaction from mainstream media outlets notwithstanding.

If Biden wants to save his presidency, he could start by saying, ‘We’re going to produce our own oil, we’re going to increase supply and lower prices so that the world stops financing Putin’s brutal war on the innocent people of Ukraine.’ The progressive Left would howl, of course.

But the country (and the world) would applaud.